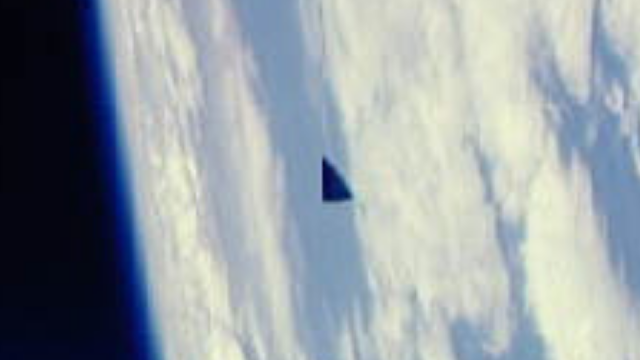 This is a real and authenticated black Triangle UFO snapped by an actual NASA astronaut, continue reading! It has to be the UFO of the week thus far? I have seen many, many triangle UFOs like the back engineered triangle spacecraft (seen in the Google Patent archive link is at bottom) and the TR3b’s and most of the different variations of that?

There’s many variants on this as all you have to do is do a quick Google search and a whole phenomena pops up. It’s incredible the many different sizes and colors. Lights, no lights and things sticking out, coming off or just nice and shiny like a forehead in the sun.

Location of the Black Triangle UFO in space.

Here’s what the post said (in brief) about this spectacular Black Triangle Spaceship which was seen between the Space Shuttle and the Earth, link to the full post is at the bottom

This fascinating image was taken during the NASA Space Shuttle Program in 1986. STS-61-C. Pictured here is a mysterious triangle shaped object floating between the space shuttle and our planet.

The Triangular-shaped UFO as it has been called by many these days was photographed on January 12, 1986, during the STS-61-C, the seventh mission of the Columbia Space Shuttle. According to official reports, the triangular shaped object is not an Unidentified Flying Object but a piece of thermal insulation tile floating randomly in space.

However, most UFO researchers firmly disagree that the image we see here is part of a thermal insulation tile. The reason why they doubt it to be a T.I.T is the fact that in the last couple of decades, there have been significant reports of strange triangle-shaped UFOs all round the planet.

Apparently the image was removed from the site, that’s another thing you should check out from the site we’re linking to as all the information is there.

Yes I know the initials look rude, but I never made it up. I’m just reporting it, lol. It is officially a space T.I.T but do you agree that this a bit debris broken free from the shuttle? I don’t think so as there is way to many examples of this triangle everywhere.

The image came from The Gateway to Astronaut Photography of Earth a website operated by NASA at the Earth Sciences and Image Analysis department at Lyndon B. Johnson Space Center.

Details of the image and credit below:

Below is the Columbia Shuttle.

Columbia (OV-102), the first of NASA’s orbiter fleet, was delivered to Kennedy Space Center in March 1979. Columbia initiated the Space Shuttle flight program when it lifted off Pad A in the Launch Complex 39 area at KSC on April 12, 1981. It proved the operational concept of a winged, reusable spaceship by successfully completing the Orbital Flight Test Program – missions STS-1 through STS-4.