In March 1966 a wave of UFO sightings would hit the Ann Arbor region of Michigan causing the eyes of the entire country to turn their attention to the Wolverine State. One particular incident over the swamplands of a family-run farm would prove to be the most detailed of all the sightings on record. And certainly, the one with the closest proximity between the witness and the apparent craft from elsewhere in the cosmos.

The incidents, while perhaps being some of the most credible and multi-witnessed events on record, would also give rise to the “Swamp Gas” explanation. An explanation not only all but disproven, but also one which J. Allen Hynek would later admit to declaring due to “pressure” from the US Air Force to supply a “mundane explanation” for the incident. That in itself should tell us that the incidents likely occurred how the witnesses said they had. It also provides us with an insight into the US government’s mindset regarding the apparently “open investigation” into such sightings.

Before we move on, check out the short video below. It features news clippings of the time looking at the mini UFO wave of March 1966 over Michigan.

The first reports began to come in to several Washtenaw County police departments from just before 4 am on the 14th March 1966. Deputies Bushroe and Foster would report seeing several disc-shaped objects with “star-like colors” of red and green. They were moving across the black early morning sky with great speed. They also performed extremely sharp turns, unlike any known aircraft. By 4:04 am, Livingston County Sheriff’s Department would confirm the sighting and would send extra patrol cars to Bushroe and Foster’s location.

Within the next ten minutes two more police departments – Ypsilanti and Monroe County – also confirmed sightings of the strange objects. At 4:20 am, Bushroe and Foster would report a further four objects of the same description. Just over half-an-hour later at 4:54 am, they would report another two objects. All traveled the same route.

By 6:15 am the objects appeared to have disappeared and the incident over. Deputies, Bushroe and Foster would make a formal joint-statement regarding their sightings. They would claim it to be the “strangest thing (we) have ever witnessed” and that they “would not have believed this story if we hadn’t seen it with our own eyes”. Bushroe would further add to the media that the object would “swing back and forth like a pendulum”. It would then “shoot upwards at tremendous speed”, hovering in mid-air before descending again “just as fast”.

Three days later in the 17th March, at a similar time of 4:25 am, Sergeant Nuel Schneider and Deputy David Fitzpatrick witnessed several strange objects hovering and rising in a purposeful fashion in the sky.

On the evening of the 20th March, perhaps the most well-known of all the incidents on record would unfold. Farmer, Frank Mannor, was returning home following his usual walk with the family dog, Qazar. He planned some quality time with his wife and son and was looking forward to a hearty meal. As he entered his property, he noticed a strange light in the sky. It was a considerable distance away, however, and after a moments glance, he shut the front door and thought no more about it. Until Qazar began to bark, obviously agitated, that is.

After several minutes, Frank and his son, Ron, would go outside to investigate. And to calm the now worked up animal. As soon as they stepped out into the front yard they could see the strange light above them. It was now closer than when Frank first witnessed it. And it was descending.

The pair remained stationary and braced themselves for the aftershock of the apparently imminent impact. Then, in the most bizarre fashion, the object stopped dead and remained motionless over the treetops of the woodland opposite the Mannor family home. The would describe the craft as a “domed oval” with a “quilted or waffled” exterior. Lights also flashed from the middle and at each end.

After several moments, Frank quickly raced inside. With the object still hovering silently, he called the Washtenaw police to report the sighting. Then, he and Ron set out towards the swamps to where the strange craft came down. 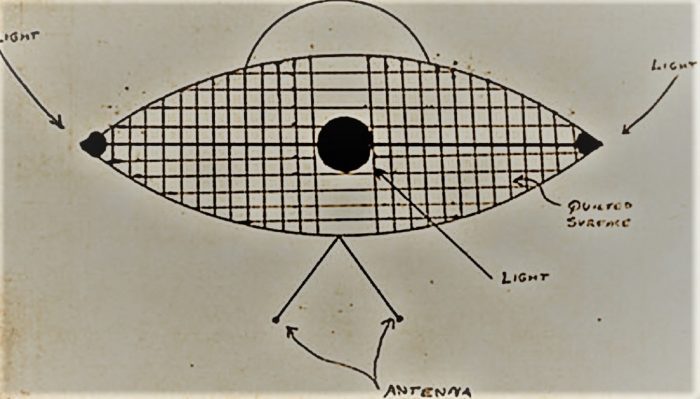 A Disappearing And Reappearing “Brilliant Light!”

The two police officers who received the call to investigate the strange light over the Mannor Farm were Deputies, Stanley McFadden and David Fitzpatrick. They would pull up their patrol car near the Mannor’s land and then proceed on foot through the swampy grounds. It wasn’t long before they too witnessed the strange light for themselves.

On the other side of the swampland, Frank and Ron Mannor were significantly closer to the lights. So close, in fact, they could see it was a distinctly solid object. Frank would estimate it to be the size of a car with a “cone-shaped” top and a flat underside. It had appeared directly in front of them seemingly out of nowhere. The whole area around them lit up as if someone had suddenly flicked a switch and caught them in a searchlight. A strange mist appeared to emerge from its underside, changing from green, to red, to white in sympathy with the intense glow of the craft’s lights.

Then, it vanished. A few seconds later it appeared again with equal suddenness but in a different spot to where it was only moments before. This continued several times before the craft then “took off” at breakneck speed. As it did, and unbeknown to Frank and Ron, it passed directly over the officers McFadden and Fitzpatrick.

At just after 10:30 pm the following evening a student at the New Women’s Dormitory at Hillsdale College would report that a strange craft had descended near their dormitory before disappearing. The student would report that the strange object had flashing lights of red, green, and white. Furthermore, as well as herself, there were sixteen other students who had witnessed the incident.

A half-hour later, the same student again contacted the Civil Defense Office stating that the strange craft had suddenly reappeared and was now hovering close to the ground near their dormitory. The person who had taken both calls was the Civil Defense Director for Hillsdale County, William Van Horn. He would notify the police department who would send three patrol cars to the location. Van Horn himself would also make his way to the apparently other-worldly events currently unfolding.

When he arrived at the dormitory, he was taken to the room where the sighting was made. When he looked out of the window he immediately saw a strange object hovering or resting in a hollow on the ground. He noticed a dim orange light that would glow brighter, eventually turning a red, and then to a full white.

Suddenly, the strange object began to move, rising slightly into the air, hovering, and then descending again. As it moved, the glow allowed him to make out very definite details of a solid structure.

Both Van Horn and several of the students and staff remained at the scene observing the bizarre movements of the glowing crafts. The last sighting of them came just after 4:30 am when they simply disappeared.

“Somebody Has Kept Something Quiet!”

Whatever did take place over the skies of southern Michigan in the third week of March 1966, it is highly unlikely that “swamp gas” is responsible. Aside from the multiple sightings, including the extremely close-up viewing by the Mannors, there were particularly strong winds in the area around the 20th and 21st March which would have prevented any such gas forming in the first place. It would disperse before having a chance to form a mass. Higher than normal levels of radiation and the presence of Boron at the locations of the Mannor Farm and Hillsdale College sightings are also strong indicators of a nuts-and-bolts unidentified craft.

Perhaps more damning, though, for the official swamp gas explanation is the insight offered by the County Sheriff of Washtenaw at the time of the sightings, Douglas Harvey. Speaking with The Ann Arbor News three decades after the incident, he would recall a conversation with Hynek in the immediate moments before the official explanation was given.

According to Harvey, he and Hynek were speaking of the strange sightings in the sheriff’s office. The investigator declared that it was his view that the sightings were very much worth further investigation. Furthermore, he had no idea what the witnesses had seen but he believed they had witnessed “something”. Their conversation was interrupted around this point as Hynek received a phone call which would last for “quite a while”.

Upon the mysterious conversion ending, Hynek would suddenly state that what the witnesses had seen was “swamp gas”. And that was that. Hynek placed a sudden phone call to Washington D.C. and then would give his official statement. According to Harvey, “Somebody has kept something quiet”.

Check out the video below which looks at the 1966 Michigan UFO sightings a little further.

Previous The James Flynn Incident – UFO Over The Florida Everglades
Next The 2008 UFO Wave Of Bucks County, Pennsylvania