More Classified Than The Atom Bomb – It’s All About Propulsion!

According to the wife of controversial UFO researcher and author, Frank Scully, the one-time head of Project Bluebook, Captain Edward Ruppelt would state to her husband that, “…..of all the books published about flying saucers, your book was the one that gave us the most headaches – because it was the closest to the truth!”

Scully is a controversial researcher, not due to his intent to fool, but more because of the amount of apparent disinformation his sources would pass his way. Perhaps that is indication enough of just how accurate many of Scully’s accounts might actually have been. 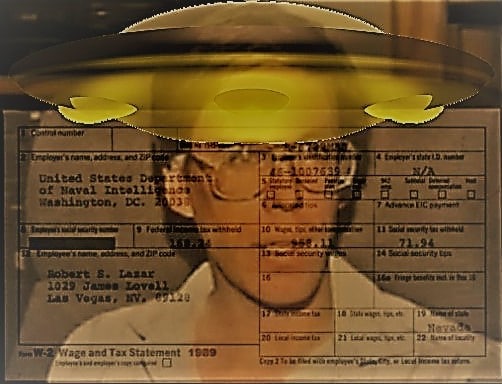 Of all the aspects that Scully would highlight in the UFO phenomenon – then in its relative infancy in the late-fifties and early-sixties – would be the propulsion systems of these apparent other-worldly vehicles, and more specifically, the energy source.

Before we look at what may prove to be one of the more important UFO incidents of the twentieth century, check out the video below. It is a short interview with Boyd Bushman who we have written about before. In it, he discusses in detail, alien propulsion systems, and his work with them.

“Alfred” And The Aztec Incident

On a perfectly still and serene evening in the Aztec Desert, New Mexico, on 25th March 1948, a blazing disc-shaped object screamed out of the sky before embedding itself in the sandy ground. The United States military was soon on the scene.

They would quickly set about transporting the wreckage to the White Sands Air Force base. The craft was a series of rings that seemingly rotated around a “central cabin”. The material was of a strength unknown to the military, yet at the same time it was as “light as aluminum!” The whole thing – as is the case with other UFO reports – appeared to be from one, whole piece of material.

It would take almost two weeks to fully move the ruined craft. As well as the remains of the vehicle were the bodies of the sixteen alien beings.

Another UFO investigator, Glen Campbell, would also pick up on the Aztec Incident. The source for many of Campbell’s reports was a man named Alfred. Not only was he present at the aforementioned incident, but he spent considerable time in the company of high ranking scientists. According to Alfred, his official job was a technical photographer at a nuclear test base.

He would speak to Campbell about a particular conversation between himself and German physicist (and Operation Paperclip transplant), Otto Krause. If true, it could be one of the most important conversations in history.

Before we look at the details of that exchange, check out the video below. It looks at the Aztec Incident in a little more detail.

The Reason For UFO Secrecy?

We have written before of Nikola Tesla and his desire (and apparent knowhow) to provide the world with “free energy”. We have also written several times of Gary McKinnon, who while hacking into the computer systems of the NSA, told the BBC the reasons for his search was “there are some very credible, relied-upon people, all saying yes, there is UFO technology, there’s anti-gravity, there’s free energy, and it’s extraterrestrial in origin and [they’ve] captured spacecraft and reverse engineered it.”

As fanciful and outlandish as it might sound to some that firstly, free or natural energy exists, and second, that governments and corporations would suppress this information, a quick examination of both points brings into focus how real this notion likely is. In short, you have to realize just how much money connects to the energy market, and just how far and how many different ways its reach stretches into all aspects of modern life. Indeed the Petrodollar system is perhaps required reading to get a grasp of this a little further.

According to Alfred and the conversation with Otto Krause, not only was the Aztec and the Roswell incidents real, but both of the crashes would offer up alien beings as well as the ruins of highly advanced crafts. Furthermore, both of the crafts were subject to reverse-engineering. Krause would tell Alfred, “…it took them a long time to get into the thing and figure out how it worked. That was what was the classified part of the UFO, the mechanism that powered it. That was more classified than the atomic bomb!”

Check out the short video below which looks at the dark claims of the Petrodollar.

The Revelations Of Bob Lazar

In 1989, a previously unheard of technical engineer, Bob Lazar, would become a well-known name around the world, if only temporarily. During an appearance on Las Vegas television in an interview with respected journalist George Knapp, Lazar would claim to be in the employment of the Los Alamos National Laboratory where, among other things, he worked with “alien technology!”

News outlets around the world would pick up the piece, as would newspapers and magazine titles, each with varying amounts of sensationalism.

Despite official denials from the Los Alamos National Laboratory that Lazar had ever been in their employment, Knapp’s research would reveal a very clear paper trail to suggest that Lazar was being truthful. According to Lazar, he would first come into contact with the agency in 1982. He would go through an intense and drawn out interview, conducted over many different meetings. He would eventually – according to Lazar – receive “Q Clearance”. And not just Q-clearance either – thirty-eight levels above that clearance.

In terms of the projects that he would work on, Lazar would state that Congress (in his opinion) was likely not aware, as a governing body, of the work going on. From what he could gather, the projects began in the late-1940s and were quickly “sealed off” and off-limits to outsiders. It is an interesting concept and one that sounds like the sub-plot to the X-Files and the “cancer-man” character.

The thing is, as wild as that comparison is, it is likely very accurate.

While most would quickly decide that Lazar was misguided at best, at least one part of this account would prove to be very true almost two decades later. Of the properties that the military was experimenting with regarding propulsion, one of them mentioned was Element 115, which at the time didn’t (officially) exist, hence most dismissed Lazar as essentially “making it all up!” Years later, however, along with the apparently correctly predicted Element 115, came confirmation of Elements 113, 117 and 118 by mainstream science. All are “superheavy” substances as mentioned by Lazar.

Check out the video below. It features Lazar speaking about Element 115.

So, what should we make of Bob Lazar? To many, he is a loner to avoid. To others, this same status makes him trustworthy. We should perhaps note that the Element 115 spoken of in the mainstream differs to that offered by Lazar. In his defense, Lazar would state that mainstream science simply has not perfected the process. Furthermore, he was confident that time will prove him correct when he said to George Knapp, “We’ll see what other isotopes they come up with. One of them, or more, will be stable and it will have the exact properties that I said!”

Lazar also offered that UFOs were not the invention of the military, but genuine, saucer-shaped discs constructed by extra-terrestrial intelligence.

The Bending Of Space And Time

We have written of the encounters of Sergeant Charles Moody and the descriptions he would give of the inner workings of the silver, disc-shaped craft he would go aboard. Years later, while speaking to UFO researcher, Timothy Good, Lazar would matter-of-factly describe remarkably similar inner workings.

He would state that a “central column” ran through the middle of the craft and would act as a “wave-guide”. This connects to antimatter reactors, which are sphere-like, and “produce a gravity field” of its own. It is this, according to Lazar that makes “manipulation of space and time possible!”

Lazar would assert that the crafts he had seen had three gravity amplifiers on their underside. These amplifiers would have their energy focused to a desired destination, and the craft would go there. Or more to the point, the destination would go to the craft.

Lazar would describe this by stating if the craft was a “big stone” on a sheet of rubber, the gravity technology would “pull the desired destination to it” – this is literally bending space and time. Once the gravity amplifiers shut down, space (or the rubber sheet) retracts back to its original point. Only now it takes the craft (or the stone) with it.

Lazar would further attest that traveling like this in deep space is relatively simple. This, due to their being little or no gravity to affect travel. The gravity technology manufactures this gravitational pull, distorting and bending space, and then “rides the wave” as it goes back to its original point. When traveling on planets, however, and particularly Earth due to its strong gravitational pull, this travel becomes much more difficult and unstable. According to Lazar, the intense weather systems also interfere with this equipment.

Check out the video below looking at UFO propulsion systems.

To overcome these conditions, the crafts have to ride the gravity of the Earth. And use their gravity generators to do so. This, according to Lazar, is also the reason why many people claim to see a craft one moment, and then have it vanish right before them. Similarly, for those sightings of “orbs or lights in the sky” that seem to dart around in a zig-zag motion. What is actually happening is the craft is “riding the wave” of space retracting to its original position.

Lazar further offered this is why some people can see UFOs and others can’t. “You could be standing right under it, and if the gravity generators are in the correct configuration. All you will see is sky!” he would offer to Good. At the same time, another group of people could be so far to the left or right of those under the “invisible” craft, and see it clear as day. “It just depends on how the field is bent!”

This technology and manipulation of gravity and space-time also accounts for the often described, breakneck ninety-degree turns at the speed of light. Lazar would state this was simply “time and space distortion” taking place.

There is discrepancy regarding how accurate Lazar may or may not have been. However, it seems apparent that there is more to him than just some “crazy guy”. Or someone who happened to have got himself mixed up with the wrong crowd.

Check out the video below. It is a documentary from the 1990s. It looks at UFO travel and features Bob Lazar speaking of his claims a little further.

Tags More Classified Than The Atom Bomb – It’s All About Propulsion! mysteriousworld

Previous The Mysterious Contact Memories Of Herbert Schirmer
Next The Tales Of Charlotte Mann – “My Grandfather And The Aliens!”