In May 1952, an experienced and respected Canadian Naval officer witnessed dozens of strange lights as well as a flying silver disc near Pearl Harbor off the coast of Hawaii. Although he was a Lieutenant at the time, the witness, George MacFarlane would go on to reach Commander status. To say, then, he is a reliable witness is a relatively safe assumption. As we will explore throughout the following, his subsequent actions would seemingly further cement his credibility.

What makes this account even more interesting is the destination of the ship the officer was on – Guam. And from there, missions with connections to the Korean War. As we and numerous other UFO researchers have examined before, wars, any wars, are apparent fertile grounds for UFO activity. And the Korean War was no different.

Perhaps, then, this was a reconnaissance mission by visitors from another world. Maybe already weary of the nuclear weapons detonated only years earlier, and eager to see exactly what similarly gathering forces were planning.

A “Single White Light” Out Of The Misty Sky!

The Canadian Destroyer H.M.C.S. Iroquois left Pearl Harbor shortly after 6 pm one evening in May 1952 en route to Guam. It was midnight that same evening when MacFarlane took over the post of Officer on the bridge. An hour later, just after 1 am, a “single white light” began to penetrate out of the “thin layer of mist” in the air. MacFarlane estimated the light was around a mile away from the ship. However, it was moving at a “rapid rate” with the mist causing a “halo” to appear around it as it moved.

MacFarlane would request confirmation of the sighting on radar. However, no object appeared on their screens. According to the radar operator, there was nothing there. He checked the logs to see if any military activity was in the area. There was none. And they were seemingly too far away from the coast – around 100 miles – for it to realistically be a small plane at this time of night.

As MacFarlane continued to watch this mysterious craft, another light appeared in the sky. It traveled from the same direction as the first craft, although appeared to move much faster. Like the first object, the radar operator failed to confirm anything on their screens. He continued to watch the aerial display for nearly an hour. The mist was now almost gone and above them was a clear dome of black.

Then, came another sighting by the unnerved but curious naval officer. 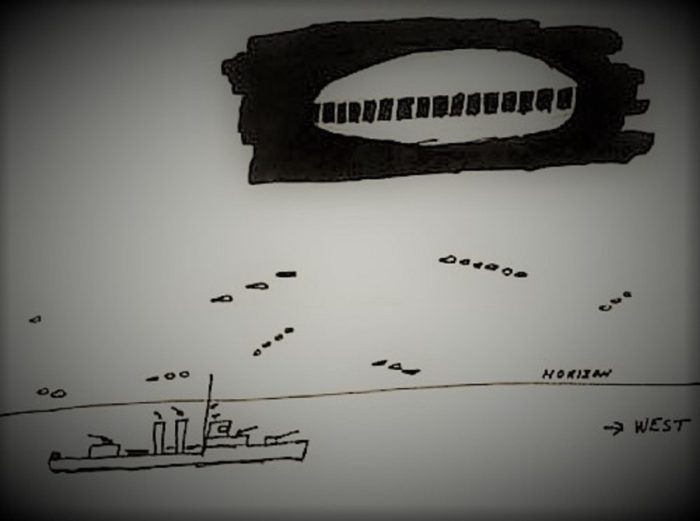 Sketch of the incident by MacFarlane

Shortly after 2 am, a series of lights began appearing in the skies overhead. MacFarlane remained at his post, perhaps unintentionally ideally placed to witness the events. Many of the lights “were in formation”, and all of them seemed to come from a destination to the south of their location. The lights were in sets of three, five, or six. They would also appear and disappear in a second, “at the same speed a computer screen operates”. At one stage there were as many as thirty lights in the sky at one time. MacFarlane began to become so overwhelmed with counting them that he could no longer keep up. Then, one of the lights came close up to the ship. The closer it got, it was no longer just a light. It was a solid object.

It had a disc-shape with a glowing metallic appearance to it. Around the edge were several “black windows”. It simply remained, motionless and silent, hovering over the ship for nearly fifteen minutes. Through binoculars, he managed to count around 24 separate windows, although he couldn’t see any activity beyond them. Interestingly, MacFarlane would state that although the object “glowed brightly” it didn’t prevent him from “looking directly at it”. In fact, he didn’t even need to squint. This suggests some kind of advanced illumination, a detail that resides in several other similar close contact events.

As he continued to watch, the object suddenly vanished. By 3 am, almost all of the lights had vanished from view. Although he had requested information from the radar operator, he hadn’t yet informed the captain of the ship. Or anyone else for that matter. Realizing the bizarre nature of his potential claims, he opted against saying anything at all.

“Many Meteorites” Visible Through The Night

After having already decided against reporting the incident, he would still have to enter something into the official log. And it would have to correspond to his requests of the radar operator and the log he would keep. With this in mind, he would enter into the log that “many meteorites” were visible during the night. At 4 am, he switched with another officer (Lieutenant Doug Tutte), ending his watch. He didn’t mention anything of the sighting at all.

However, when Tutte met up with MacFarlane in the ship’s canteen for breakfast, obviously having read his comments in the log as he wrote his own, he asked why he hadn’t mentioned anything to him of the “meteor” sightings when they switched over. MacFarlane eventually relented and gave his reasons for keeping tight-lipped about the incident. Then, safe in MacFarlane’s confession, Tutte revealed he had seen similar things. And he too had decided against reporting his sighting to the captain. And for exactly the same reasons.

However, as the two officers spoke discreetly and compared their experiences, both would agree they had feelings of being under some kind of strange “hypnotic control”. Almost as if their decision, as much as they understood it, was influenced by a higher understanding. Ultimately, each would agree to keep these most mysterious events to themselves. Neither would mention the incident again until MacFarlane, several years after Tutte’s death and decades after the events, would make his report to UFO investigators.

Incidentally, and as a side-note, perhaps we should examine again, as laborious a task as it might be, other reports of “meteorites” in similar naval and military logs.

According to MacFarlane, there were others on board who witnessed these strange lights. General “lookouts” would often report “funny lights”, although they would never elaborate on these statements, likely for similar reasons to MacFarlane and Tutte. These sightings would continue throughout their journey. The lookouts would continue not to report them because they “were neither ships nor aircraft”.

Ultimately, as to his reasons for finally reporting the incident, MacFarlane would write, “A feeling of guilt or a sense of duty? Probably because I think it is important that it be recorded. And now, I am old enough not to worry about being ridiculed”. He would further state that these crafts “acted in a non-threatening manner”. And that “they were just inquisitive”. Furthermore, since the incident, he had not witnessed another such sighting. Perhaps this lends the one-time naval officer and his intriguing account just a little bit more credibility than it surely already owns.

A similar sighting occurred only months earlier, in roughly the same stretch of water, in late-March/early-April (there is discrepancy as to the exact date). The incident, however, is in the Project Blue Book files, so there is little doubt about its authenticity. And given the location, the high-ranking identity of one of the passengers involved in the sightings, and the upcoming Korean conflict that the US forces were so obviously maneuvering their military pieces into attack positions in anticipation of, you could make a strong argument of a connection between the two events.

The incident involved another Navy Secretary, Dan Kimball, who was flying to Pearl Harbor in Hawaii when two “disc-shaped craft” came out of nowhere and approached the Navy executive airplane. He would describe their speed as simply “amazing” and would estimate them to move at a pace of between 1,500 and 2,000 miles per hour.

As well as the plane Kimball was in, another Navy plane was on the same route but behind them, at an approximate distance of around fifty miles This one carried Admiral Arthur Radford and they too saw the bizarre events unfold in their entirety. The objects began to move in a circular motion around both of the planes. Kimball would later state they “covered fifty miles in less than two minutes”. The shining silver discs would circle both planes twice in total before disappearing into the early-evening sky as quickly as they had arrived.

Upon landing at Pearl Harbor, Kimball would make a report to the US Air Force, as they were officially in charge of investigating such sightings. However, despite several attempts by Kimball to follow up his report, the US Air Force flatly refused to cooperate. When he went to check Navy records, he would find all were now under the control of the Air Force as part of their “investigation”.

Whatever happened that afternoon, it is likely the intelligence behind these discs are one and the same with those MacFarlane witnessed several weeks later.

Check out the short video below, it looks at a recent UFO sighting over Pearl Harbor.