The 1968 Alien Abduction At Buff Ledge

An apparent case of alien abduction at Buff Ledge, a summer camp for girls in Vermont, in the summer of 1968 went unreported for a decade before one of the witnesses, suffering from intense nightmares of his experience, would enter his version of the account on to the record of the Center for UFO Studies. The report would catch the attention of UFO researcher and investigator, Walter Webb who would conduct extensive and thorough investigations into the incident.

Although there were accusations of a hoax from residents who still reside in the area and “alumni” of the now-closed summer camp, it was the firm opinion of Webb that such a plot simply wasn’t possible. And furthermore, had the two witnesses been a part of such a hoax, they wouldn’t have waited ten years to report it. Nor would they have lost contact with each other almost immediately after. It would appear to Webb, and indeed other researchers who have examined the case since, that the events at Buff Ledge are not only credible but potentially important to the overall UFO and alien question.

Strange Lights At The Lake

On the late afternoon of 7th August 1968, two employees of Buff Ledge summer camp, sixteen-year-old maintenance worker, Michael Lapp, and nineteen-year-old ski instructor, Janet Cornell, were relaxing on the edge of a boat dock watching the slowly setting sun dance on the water. The summer camp sat on the shores of Lake Champlain in Vermont, just north of Burlington which, incidentally, is where most of the campers were this particular evening, attending a swim meet. Hence the entire campsite was almost deserted.

As the sun bid farewell to the day and night took charge, Michael noticed a strange light in the distance. At first, thinking it was a star or even a planet, he sat watching contently. Then, the light suddenly dropped much lower to the ground. And what’s more, it was moving towards the teenagers at an alarming rate.

As the pair watched this otherworldly performance, three separate lights detached from the first, large glow. These three lights would head directly towards the lake, while the larger light seemed to ascend again rather quickly and disappear from sight. The three glowing orbs zig-zagged and danced between themselves over the shimmering waters below, pulling off moves that neither had seen an airplane or helicopter manage. As the two teenagers continued to watch, the three shining objects moved closer still to them.

Then, they formed a triangle shape and remained still for a second before two of them moved away slightly. As they did so, a sound rang out “like a thousand tuning forks” which caused considerable discomfort to the pair. The remaining object suddenly shot upward before diving straight into the lake and vanishing beneath the surface. Then, it reappeared and glided across the water, heading straight for them.

As the object continued its approach, Michael made out a “transparent dome”, seemingly on top of the it. Inside this dome, he could make out “two childlike creatures” with elongated necks and large heads. He also noticed their large eyes which stretched around to the sides of their heads. As it moved closer, rising from the water and hovering directly over the unnerved teenagers, it fired a beam towards them. Michael grabbed Janet out of the way forcing both of them to the ground and away from the strange light.

He would later report he remembered shouting at the object “We don’t want to go!” as fears and stories of alien abduction filled his mind. He would also recall that he could see the bones in his hands as if viewing an X-ray such was the brightness of the light beam. It passed closer to them. Each would recall that it caused a floating sensation. And, even stranger, that the light itself had a “liquid” feel to it.

The next thing either of the teenagers knew, they were sat calmly on the boating dock. The intense light was gone, and the strange object was now much farther in the distance and heading away from them. The sky was now no longer the dark blue of early evening, but completely black, suggesting it was much later. When Michael turned to Janet, she appeared to be in a trance. Both of them felt somewhat disorientated and confused. As the strange object finally vanished from sight, the pair could hear the other campers back from their swim meet. 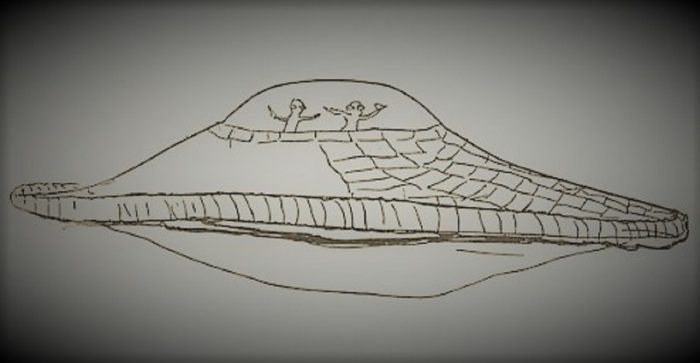 A Decade Of Intense Nightmares!

Michael and Janet would keep the sighting strictly to themselves for the remainder of the summer. And following the end of the camp season, the two witnesses would depart back home and back to their individual plans and lives. However, over the years, Michael began to suffer increasingly intense nightmares. They were always the same – of being abducted and “not wanting to go”. The dreams eventually made him think about the incident at Buff Ledge more and more until eventually, ten years after the encounter, he would contact the Center for UFO Studies to make a report.

UFO researcher, Walter Webb, would take on the case. He would almost immediately suggest hypnotic regression to get to the bottom of the nightmares, and to find out just what happened on the boating dock in the summer of 1968. It would appear those memories were bubbling just below the surface as Michael immediately recalled the incidents as soon as he was regressed.

He would state that the light had seized both of them and lifted them on board the craft. He recalled “streams of approaching colored lights” while also noticing a “loud whine” the nearer to the craft he got.

Once inside the craft, he could see Janet laying on a table and under examination. Several of the small entities performed the procedure. They would shine lights in each of her eyes and take samples of skin, hair, and blood. He viewed the events from some kind of “upper deck” with one of the alien creatures beside him.

As he looked upwards to the transparent dome, he could clearly see the Earth, the Moon, and an everlasting net of stars against the blackness of space. Michael also noticed a huge “cigar-shaped” craft which he assumed was a “mothership”.

He would recall how these creatures all looked exactly the same, and how their bodies had a “damp and clammy” look and feel to them. He estimated them to be around five feet tall with long, thin arms and legs. Their skin was a strange “greenish-blue”, a similar color to the skintight green suits they wore, which made them appear as though they were naked.

He would further recall that each had “three-pointed web-like digits” for their hands. During this, the entity placed a thought into Michael’s mind. Their mission was to “make life like ours…other places”. When pressed on this, the explanation was much clearer. They wished for life on Earth to be like their planet – without violence.  He would also recall that the entity was “surprised” that he was alert and asking questions. Perhaps ominously, and correctly, the creature would state that because of this “it would be difficult for him after the experience was over”. Despite the situation, and for reasons he didn’t understand, Michael claimed to have a “great affinity or closeness” with this particular entity.

The creature then led Michael down a set of steps and onto the floor which housed the table upon which Janet lay. Then, the creature led Michael to another table. It tilted slightly to allow him to lean against it before returning to its horizontal position. The last thing he remembered is looking out of the transparent dome, seeing the large cigar-shaped ship now much closer. Then he lost consciousness.

A “Real External Event” With “No Opportunity For Collusion!”

During the investigation Webb had managed to track down and convince Janet, now a married twenty-nine-year-old, to also undergo regression. What she described under hypnosis corroborated Michael’s version of events entirely. She would recall laying on the examination table, which induced a “cold” feeling within her. She also recalled something “pulling (my) hair and pinching (my) neck”. Furthermore, like Michael, she recalled following one particular entity who she referred to as her “guide”. And who was “her only source of comfort” throughout the experience.

Webb would also conduct extensive research with numerous ex-employees of the summer camp. And the guests during the summer of 1968. He discovered that several employees at Buff Ledge had witnessed strange lights and objects over Lake Champlain on the same evening that Michael and Janet claimed to have been abducted.

Furthermore, two other employees would also report to Webb they suspected they too were the victims of abduction. The incident was earlier in the summer, several weeks before the August incident of Michael and Janet. However, it mirrored theirs almost exactly. An incident which began with strange lights over the waters followed by the appearance of a disc-like craft.

Webb would also perform several character evaluations on both Michael and Janet. All in all, they were, according to his research, credible witnesses with no reason to manufacture such a story. Certainly not ten years after the fact with no known contact between the pair since the summer of the incident. Overall Webb would find, the pair had “no opportunity for collusion” and “experienced a real external event of unknown origin”.

The short video below looks at the details again in a little more detail.