The small mining town of Dalnegorsk in the Primorsky Krai region of south-eastern Russia, bordered by China, North Korea, and the Sea of Japan, resides in a serene and picturesque valley within equally picturesque hills and woodland near the Rudnaya River. However, in late-January 1986 that serenity was broken by an apparent UFO crash. And then, the intense rush of media attention on the area that would follow.

Hundreds of people would witness the events. And aside from the media interest, many Soviet UFO researchers would risk sending private accounts of the incident to like-minded researchers on the other side of the political divide and through the Iron Curtain. So significant are the events that many refer to them as the “Roswell Incident of the Soviet Union”. And what’s more, like such similar incidents around the world as the Roswell Crash or the Rendlesham Forest Incident, they remain, by and large, unexplained.

At around 7:55 pm on the 29th January 1986, a bright “reddish sphere” appeared in the cold winter sky over Dalnegorsk. It would move with great speed but made no sound whatsoever. Multiple residents of the small town witnessed the object seemingly flying parallel to the ground. It was a “near-perfect round shape” and apparently of a metal exterior the color of “burning stainless steel”.  Yevgeny Serebov, a young boy at the time of the incident, would state that the object had “neither tail nor trail behind it”. The idea then that it might have been a meteor, if Serebov’s description is accurate (he is now an accomplished scientist), is unlikely. This, incidentally, was confirmed by Soviet scientists who would arrive in the area in the aftermath of the incident.

Suddenly, the strange aerial craft began to stutter and “jerk” slightly. It would then “fall down like a rock”, eventually crashing into the Izvestkovaya Mountain, otherwise referred to as Height 611 (in reference to its size). Most of the witnesses would describe the sound of the impact as a “muted thump” before the ruins would burn intensely for around an hour (some estimates suggest the duration to be shorter). What most did agree on, however, was the fire was of an electrical nature.

The editor of the local ‘Trudovoye Slovo’ newspaper, “V. Korotko” would state that after a short but powerful explosion he could see “large reddish-white flames”. He would state that the fire, although powerful, would only burn for several minutes. It is perhaps worth noting that some witnesses would report that the actual ground around the object began to burn. This might be the reason for the discrepancy in how long “the object” burned and how long the flames themselves were visible. 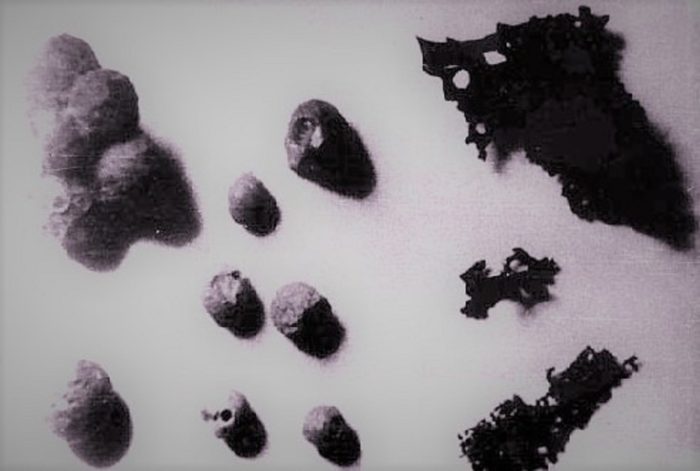 Investigation And The Recovery Of Strange Fragments And Materials

Dr. Valeri Dvuzhilni, who was the head of the Far Eastern Committee for Anomalous Phenomena, was the first to lead an investigation into the incident during the opening days of February. However, before he arrived, a small group of locals, a mixture of children and adults, had ventured out to the site for themselves. They would discover a burnt-out tree stump and several indentions in the ground, presumably where the sphere had impacted. They didn’t find any large pieces of debris as they were expecting. Like they would, for example, if it was a conventional plane crash. However, they would discover, and collect, several rock fragments with a strange metallic tint.

They would pass their findings along to Dvuzhilni who would immediately think to himself how these samples had the appearance of “soft metal”. He would perform brief examinations of them, subjecting them to a variety of acids. None would have any affect.

When he arrived at the site for himself, he would find that the entire ground and surrounding vegetation was entirely burned away. What’s more, this burnt land was so definitely defined, that it appeared to be a different part of land entirely. The snow surrounding the scorched section was still thick and in place, for example.

Careful investigation of the ruined land would uncover around thirty strange “droplets” of a dark color and unknown origin. Most of these were less than two millimeters, however several were as large as five millimeters. When analyzed they were found to contain compounds of nickel, chromium, and aluminum. Furthermore, only a diamond blade-saw could penetrate their exterior. They would further discover that the metals were amorphous. This would suggest their origin was likely a “laboratory setting” and not naturally occurring.

Upon further and more detailed study, the droplets would reveal some outstanding, almost futuristic properties. For example, tiny threads were found to be made of “inner fibers” which had a plait-like appearance. Furthermore, intertwined within these already complex fibers were thin gold wires. Further still, the overall gold content would boast over 1000 grams per ton. When we consider that our own industrial use of gold requires only four grams per ton, it is easy to understand just how futuristic and strong this material is. Around these super-gold lines were also quartz-crystal “cords”.

Even stranger, and perhaps in a similar way to some of the bizarre theories scientists are working with today that suggest reality doesn’t actually exist unless we view it, when investigators would straighten these lines out to view their structure further, they would “jump” from view and disappear. Not only that, but once straightened out like this, they could no longer be found.

Alexey Kulikov, a carbon expert at the Far Eastern Branch of Russian Academy of Sciences, would state that some of these strange samples appeared to be “glass carbon”. However, how they came into being would be impossible to say. Their structures did, though, suggest a very purposeful design, which would require “super high temperatures” for their creation. In short, they would appear to be of intelligent creation.

The short video below goes over the basics of the incident. It also looks specifically at some of the fragments recovered.

Further investigation at the site itself would also declare some interesting findings. For example, the burnt tree stump was particularly intriguing. One side of it had a bizarre shiny appearance as if it had some kind of seal on it. Testing would reveal it was in fact melted. When wood burns, pure carbon is the result. And for carbon to melt as the tree’s appearance suggested had happened, the temperature would have to be in excess of 3000 degrees Celsius. This “polished” appearance would surface in other places around the crash site also.

According to locals and the persistent research of investigators, the area would remain “active” for several years following the incident. No vegetation would grow within the area and no animals, insects, or birds would venture there. The interested locals or over-enthusiastic researchers who did take the risk of a visit would often become very sick in the days following. Furthermore, electronic equipment would rarely work within this bizarre zone.

That something came down on the mountainside that cold January night is not in doubt. What it was, and why there was no wreckage of any kind aside from the fragments already mentioned, however, is the real question. Dvuzhilni would theorize that the craft, which indeed had crashed, was not engulfed by the flames. Remember, the flames around the craft may only have burned for several minutes. The “burning” (which remember was of an electrical nature according to most witnesses) was repairs being carried out by whatever crew were on board. This, according to the theory, explains the extremely high temperatures in only very specific places. This would also explain the lack of wreckage. At some point in the hours following the crash, the object discreetly continued on its way.

Just over a week after the apparent crash, on the evening of the 8th February at a little after 8 pm came reports of sightings of two “yellowish spheres”. They would approach the small mining village and would appear to circle over the crash site several times. They then simply turned back in the direction they arrived from and disappeared.

An even stranger incident occurred late in the evening of 28th November 1987, when just before 11:30 pm over thirty objects appeared in the sky. Witnesses, of which there were again numerous, would recall how the objects seemingly “appeared out of nowhere”.  The objects would appear to disperse to different areas of the village, seemingly surveying them. Five of them would perform this surveillance over the crash site. Each of the objects glowed and moved absolutely silently through the freezing night sky. Townsfolk initially though the objects were military jets. However, their lack of noise combined with the interference on television and radio receptions would make them reassess their initial thoughts.

Is there something special about this area of Russia? Dvuzhilni would theorize that perhaps these apparent space visitors use such “geological fissures” on the planet as a form of orientation. The area of the crash, for example, resides over a substantial geological break. Not only this, “powerful electromagnet and gravitational energy” is present there. As much as these areas may be used for guidance, they may also cause crashes of these objects. Dvuzhilni claims to have pinpointed several areas of interest within Russia. These areas contain similar geological breaks and have more than their fair share of UFO sightings.

The video below looks at this intriguing case a little further.