In the first hours of 1970 in British Columbia, Canada, one of the most intriguing UFO episodes unfolded over the Cowichan District Hospital. While several of the night-shift nurses would witness the strange object as it made its way away from the building, one of them, practical nurse, Doreen Kendall, would see the craft and its occupants up close.

Furthermore, many corroborating sightings occurred in the hours that followed, all of which had multiple and credible witnesses. And all of which shared remarkably similar details. Further still, all the witnesses would remain firm to their original reports, not wavering or changing their account one bit among the (at times) waves of questions from investigators and researchers. That it came in an age before the Internet and twenty-four-hour news services, when such events would remain unknown to the wider populace for days instead of hours, perhaps makes the case even more compelling.

Before we look at this encounter in detail, check out the short video below. It is just one of many UFO sightings over the Vancouver Islands.

Doreen Kendall would begin her shift at the hospital at the stroke of midnight, New Year’s Day, 1970. As the 1960s moved aside for the seventies to take its place, Kendall went about her duties on what was, to her, a standard eight-hour nightshift. As it turned out, the shift was far from normal.

She was making her way around the wards of the hospital checking on the elderly patients in their care, along with registered nurse, Frieda Wilson, when events would take a strange turn. It was a little after 5 am when Kendall noticed some agitation from one of the residents. Leaving Wilson to check on another patient, Kendall went to the window to pull back the heavy drapes so as to allow some fresh air into the room. Instead of the crispness of the morning air, however, an intense bright light entered upon the parting of the curtains.

After several moments of allowing her mind to process what was happening and for her eyes to focus, she could clearly make out the source of the light. A huge “Saturn-shaped disc” hovered around sixty-feet away from the building.  The craft was approximately fifty-feet in length and had a clear divide between top and bottom. The bottom of the craft was “silvery, like metal” and had a bowl-shape to it. The top was more a dome shape “made of something like glass”. It was from this top section that the light came from. Kendall would claim she could “see right into it!”

It was then that she noticed the two “masked figures” in the top section.

“Inside” The Control Room

She would estimate the humanoids to be around six feet tall. Each donned a “tight-fitting suit” that seemed to be of the same material as the masks. Strangely, she thought, their hands were bare. Each of them was engaged in various activities taking place inside the craft, which was now tilted slightly forward. This angle revealed more of the inside of the strange ship.

She could clearly see two objects resembling stools behind each figure. There was also a large chrome or metallic “instrument panel” which stretched along much of the back “wall” of the craft’s interior. Upon the panel were many lights, shapes, and symbols. It was, although she didn’t understand what she was seeing, a background of activity. One of the humanoid’s attention was focused solely on this control panel “as if something very important was going on!” She had the impression that the craft was suffering some type of malfunction or difficulty.

As she continued to watch, curious and enthralled, but with no sense of fear, one of the figures suddenly turned towards her. Despite the humanoid’s face remaining covered by the material, Kendall believed he could see her and was looking directly at her. She stared back and noticed the figure tap the second humanoid to get its attention. He then began to maneuver an instrument that looked similar to a computer joystick. The actions were very purposeful. At the same time, the craft began to circle slightly in an anti-clockwise motion. 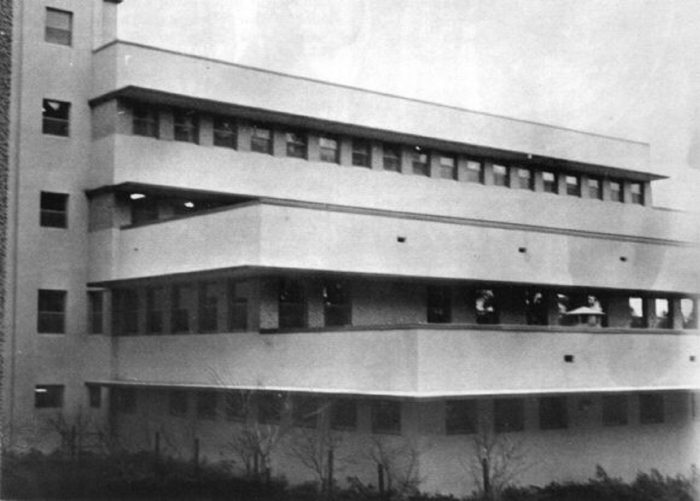 Kendall remained at the window in silence, almost as if she feared any sound or movement may “frighten off” the occupants of the craft. She realized that her superior, Wilson, was standing behind her. As quietly as she dare, she motioned for her to approach the window. The object was beginning to move away and Kendall was suddenly fearful that with no other witnesses, people were likely to not believe the incident took place. Luckily, Wilson arrived at the window and exclaimed, “what on Earth is that?”

Wilson would later describe the object as “great big light” that was circular and “quite a bit larger than a car!” She would state it was “moving around slowly”, level with the windows of the children’s ward. Shortly after, it began to move away from the hospital.

As if spurred on by the craft’s apparent departure, each woman called out aloud to their fellow workers. Two more nurses would arrive at the window shortly after. Although the craft was now a considerable distance away, each could also see the “bizarre nature” of the lights. One nurse rushed to another window where she would witness the craft rotate before shooting off “like a streak!”

One interesting detail is the feelings each of the two main witnesses felt during the encounter. While Kendall found the experience bordering on euphoric, Wilson would state to feeling “alarm and fear!” Some researchers have speculated that the calmness felt by Kendall may have been induced by unknown technology on board the craft. Many cases of close-up UFO sightings, for example, speak of the paralysis of the witness. While there is no indication that Kendall was paralyzed during the encounter, she did appear in a “trance” until the craft began to move away.

Regardless of what the object and its occupants actually was, the fast-thinking Kendall would note the incident in the official work records of the hospital. Her entry reads:

“At 5 a.m. I saw a flying saucer as low as the third floor of the hospital when I pulled the curtains. There were two men or figures in the dome flying towards Victoria. The bottom of the saucer was brilliantly lit and also the dome — New Year’s morning.”

Although Kendall didn’t know it at the time, there were other sightings of strange aerial craft in the Vancouver Island region that day. It was only when the story first appeared in the ‘Cowichan Herald’ a week later that people would come forward with their sightings. A husband and wife, who were driving home from a New Year’s Eve party would recall a bright light “as big as a house” hovering overhead at just after 5 am.

Later that evening, a little after 7 pm, the Drummond family were preparing a New Year’s dinner in their home which overlooked the Mill Bay coast. As Bea Drummond opened the door of her property to call her grown-up son in to eat she noticed a bright “yellow-orangey” glow moving across the sky. Her son, Jim, and his wife, Dianna, were still on the family boat near the shore. Upon seeing the object, he quickly retrieved his telescope. 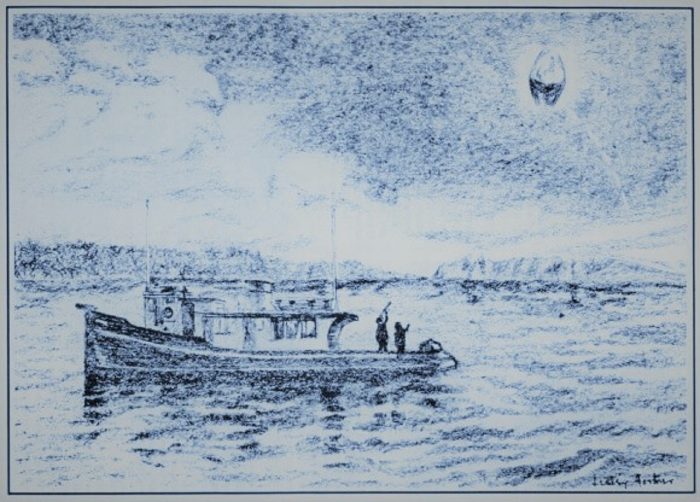 Sketch based on details of the Brummond sighting

Sightings Off The Mill Bay Coast

Jim Drummond worked as a ship’s pilot and used his work skills as he studied the strangely moving object. It was around 900-feet from the water’s surface.

He would describe the craft as “egg-shaped” which had a “transparent top”. Interestingly, and similar to the detail offered by Kendall less than twenty-four hours earlier, he could make out “a set of lights” in the inside of the top compartment. Bea called to her son to get off the boat and into the house, fearing for their safety. As she did so, she would turn on the floodlight on their back porch to light up their way. As if in response, the strange craft suddenly screeched down and stopped at around 300 feet. Its position, however, was in between the boat and the house.

An instant later, a “ray of light” emerged from the craft, described by Jim as a “very thin neon tube!” Within the light was “dots and dashes” of something similar to Morse code. This light swirled and curved and then, following a flash, vanished. A second or two later, the craft shot directly upwards and then moved away at astonishing speed.

Neighbors of the Drummonds, the Hallets, whose house was directly behind and above, would confirm the sighting. They too were just about to eat when a “large orange light” moved over the water off the shoreline. George Hallet would state “this was no ordinary aircraft” and that the craft seemed to move in absolute silence. It was, according to Hallet, visible for around five minutes before it vanished suddenly.

Diners at the Deer Lodge on Mill Bay would witness the orange glow only moments later. Most would describe it as a “large ball of light” which, given its obvious distance, “must have been very bright!”

That there was something in the skies over the Vancouver Islands region of Canada in the first days of 1970 is without doubt. And the fact that many of the witnesses were professional and credible people with responsible jobs, it is strange to think all would decide to tell “wild stories” on the same night of the year, risking both their reputations and perhaps even their incomes as a result.

What is perhaps interesting, is the residents of the Vancouver Islands region have experienced such sightings for decades. And like many locations on the West Pacific coast it appears to be a hot-spot for UFO activity.

There were several other sightings of strange “red-orange” objects in the area in the weeks that followed the New Year’s Day activity. One such report would come from a grade school aide, Edith Beiling. She claimed to have seen an unusual object over the skies of the Alexander Elementary School early one January morning. Another incident saw motorists bring their vehicles to a halt on a usually busy highway to observe a “strange glow” moving across the sky.

Sightings continue in the region today, but never as concentrated as the January 1970 episode. Whether those sightings were of a race from elsewhere or were the result of secret terrestrial technology is open to debate. For now.

The video below looks at some of the most intriguing UFO encounters from this region of the world.