The Extraordinary Claims Of Betty Andreasson

Although not the first high-profile claim of alien abduction, the extraordinary case of Betty Andreasson is considered by many to be one of the most important and unique. Not least because the incidents stretch over several decades and share details with many other cases over the years.

Following her reports to MUFON of partial memories, she would work with Dr. Raymond Fowler, using hypnotic regression to unlock a lifetime of abduction experiences. These sessions would take place in “phases” and would last from the late-1970s into the mid-1990s. The case is also intriguing as it blurs heavily into such territory as faith and perception. This is perhaps due to Betty’s determination to make sense of the bizarre events that appear to have been unfolding around her most of her life.

Although it would prove not to be the first encounter, the incident that would spark enough memory to have her look at the events again took place at her home in the northeast of the United States over fifty years ago.

A Foggy Massachusetts Evening In January 1967

On the evening of 25th January 1967, a little after 6:30 pm, Betty Andreasson, along with her parents and seven children were at their Massachusetts home in South Ashburnham. Suddenly, a flickering of the lights captured everyone’s attention before absolute darkness took hold around them. Within a matter of seconds, a strange glow shined through the windows from outside. It would turn a warm orange color as it illuminated the inside of the property.

She would later describe the scene as if someone had put them into a vacuum. As if “time were standing still!”

Betty would tell the children to wait in the living room. She was in the kitchen, along with her father who had moved towards the window to get a better view. He could make out several “humanoid creatures” approaching out of the lights. Then, he could see one of them right outside the window. It turned to look at him, and upon making eye contact, Betty’s father appeared to go into a strange trance-like state of suspended animation. He would not remember anything more of the encounter.

All of those in the house aside from Betty were placed into the same kind of “suspended animation” like Betty’s father. They then asked her to join them outside. Fearing for the safety of her family, however, one of the humanoids had to release one of the children, Becky, from her suspended state so as to prove no harm would come to them. Interestingly, years later, Becky would recall this incident through regression.

The Experience On Board The Craft

Following the demonstration of her family’s safety, Betty agreed to follow these strange creatures. She would explain later that she felt “compelled” to do so. One of the visitors would remain behind to “guard” the house and the remaining members of the Andreasson family.

Not at all aware of how she did so, Betty would “float through” the solid wood door of the kitchen as she followed her other-worldly guides. She “floated” onboard an oval-shaped craft and before she had time to fully take in her surroundings she could feel the momentum shift as the craft raced upwards to the sky.

Betty described various procedures and examinations taking place before entering a tank of liquid. She was also given a strange liquid to drink that was to have a “tranquilizing effect!” The next thing she knew she found herself floating towards another chamber. A chorus of strange voices met her telling her of their choosing her to “show something important to the world!”

Following this, Betty would find herself back in her home, the humanoids still there, but now systematically placing each member of the family into their beds. All were still in their trance. Betty would watch these events take place, with one of the humanoids stating they “were here to help” humanity but that humans “will fear them!” Betty also claimed she was told that these creatures were “not bound by time”. And perhaps most intriguingly that “man is not made of just flesh and blood!”

It wasn’t until a decade later that Betty would begin to recall the events of that evening. And even then, it wasn’t until she underwent hypnotic regression under the watch of Dr. Raymond Fowler that everything aside from the strange lights and the five creatures entering the room came back in full. Her first set of hypnotic regressions would take place over a twelve-month period between January 1977 and January 1978.

Although she would undergo further sessions with Dr. Fowler that would stretch right through into the 1990s, the accounts of her first experience were fascinating. Perhaps not least due to the amount of supporting, if circumstantial evidence that would lend them credence.

For example, Betty would claim the reason her parents were with her was due to her husband being in hospital following a car crash. Hospital records do show that this was true and show her husband’s admittance from mid-January to early March 1967.

Furthermore, she recalled there was snow on the ground, but the air felt warmer than it should, and there was fog. Weather records show that there was “mist rising from melting snow” due to an increase in temperatures.

There was also a power failure in the region that evening, at the same time Betty recalled the power going out in their home. Her father, who was in a trance throughout the episode, could recall a “child in a Halloween” costume looking through the window. Even records with the television schedules would prove their statements of what was on the television prior to the incident proved to be correct.

Further Revelations From Long Before

Betty would reveal other abduction experiences during future sessions with Dr. Fowler. Her first experience happened as far back as 1944 when she was merely seven-years-old. She was in a playhouse waiting for a friend when a strange red orb entered the small play space and settled between her eyes. As it did so, her head began to ring out with strange voices telling her they were watching her.

They also claimed they would meet again when she was twelve years of age, which they did five years later in 1949. She was walking in woodland in nearby Westminster when a grey creature dressed in a one-piece coverall awash with buttons and symbols stepped out before her. It pressed a button on its coverall and a red orb emerged. The orb, like before, settled on her face between her eyes. And again, her head filled with the strange, but now familiar voices.

A year later in 1950, an orb-like object would take her on what is arguably one of the most bizarre encounters on record.

Once on board, a strange instrument was placed inside her mouth which held down her tongue. She found herself on a bizarre wheel made of a rubber-like substance. The craft entered a body of water (she did not know where) and would emerge in an underground base. Betty would recall going through a “Museum of Time” with different versions of humans throughout history on show in glass-like containers.

Also during this encounter, although she didn’t elaborate on how, she was “caused to have an out of body experience” and would enter into a “world of light”.  She would describe this encounter as one of “feeling at oneness with all things!” 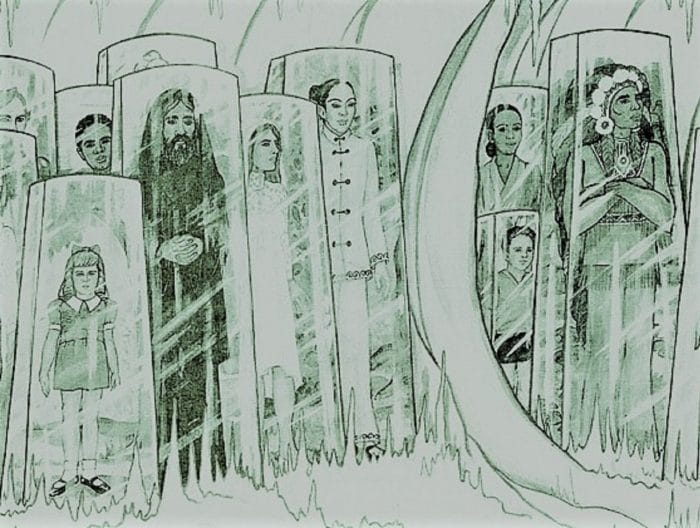 An illustration of the “Museum of Time” by Betty Andreasson

As the decades were reexplored through the hypnosis sessions, Betty would reveal more and more encounters. On several occasions, she would describe waking from sleep to find “strange entities” in her bedroom. She would even receive forewarnings of upcoming “trying events” in her life. In 1975, for example, a bedroom visitor informed her that her marriage would end in divorce (it did shortly after). Two years later in 1977, she was warned that two of her sons would meet an untimely end. A short while later both were killed in a car accident.

She would also undergo several out-of-body-experiences. One particular time in 1978 she even experienced a shared encounter with her second husband, Bob. Each found themselves – or at least the essence of themselves – in a large, round, alien facility. They witnessed a bizarre and advanced operation taking place on three of their family members, meaning they too were subject to abductions. This last point is interesting as many abduction cases not only reveal a long history in the subject but often incidents of family members sharing such encounters.

There was also increasing signs of implants inside their bodies. Even more disturbing was evidence of “scoop-marks” which looked similar to biopsy tests. Chillingly for Fowler, he would discover these marks on his arm also, suggesting that whatever had an interest in the Andreasson’s, now had an interest in him.

The video below goes over the basics of the Andreasson encounters.

A Divine Perception Of An Other-Worldly Encounter?

For much of the sessions and her memories of the encounters, Betty would call the entities that visited her, angels. She was a religious person, and this may have simply been her way of interoperating such strange encounters. For example, when she was twenty-four-years-old in 1961, she felt a strange luring from her home into the woods nearby. She would encounter a “tall grey humanoid” in the woodland, who she believed was a messenger of “The Lord”.

Although it is not unique, connections to religion or some kind of “supreme entity” in modern-day UFO accounts are rare. We have written of several of them though, including the experiences of Kathryn Howard and Sidney Patrick. Encounters that reference a specific “god” or religion, however, are even rarer.

This assertion that these entities were “angels from The Lord” would lead many to accuse Andreasson of seeking monetary gain. Indeed, the several books on her encounters over two decades did little to dissuade those who felt this way. However, many who have studied the case more in-depth disagree. They believe there is more to it than merely looking for money or fame by Andreasson or Fowler.

As we have written about on several occasions, many UFO cases from antiquity were often perceived to be divine events. Indeed, one could make a good argument that the vast majority of ancient and religious writings, particularly in the western world, have their basis in a misunderstanding of events and incorrect interoperations. Perhaps, given Betty’s already strong faith, this is a similar modern-day example of such a “divine” perception.

The video below looks not only at the Andreasson case but features Betty Andreasson speaking alien abduction.

Previous The Multiple Alien Abduction Case of Houston, December 1992
Next Just What Is The Alien Agenda?