The Greifswald Lights Incident – A Last Sighting Of The Cold War?

In late-August 1990, only weeks before the official unification of East and West Germany following the fall of the Soviet Union and the tearing down of the Berlin Wall, came a sighting over Greifswald, a city in the former East German territories near the Baltic Sea.

The lights had, in fact, been appearing since the first days in August, usually hovering over the waters of the Baltic. These lights would suddenly display movement not of any known aircraft. They turned with a razor-sharp precision and their speed was much faster than a plane or a helicopter. They would often appear for several minutes at a time before vanishing from sight. Several weeks later, however, they appeared much further near land. And what’s more, they were visible for a lot longer than a few minutes.

Witnesses For Miles Around

The strange spherical lights appeared in the early evening, around 8:30 pm on the 24th August. The sky had a burnt, golden orange tint to it as the Sun bid farewell until the following day. Residents would witness the events in their hundreds in Greifswald, Rostock, and Neubrandenburg. Other witnesses would include residents on the Isle of Ruegen, and the Isle of Usedom. Many would manage to snap photographs of the other-worldly display. Some would even capture video footage. That something was clearly visible that evening over East Germany is without doubt.

A school field trip was taking place that week on the Isle of Ruegen. There were forty schoolboys and several teachers who all viewed the cosmic show from their accommodation for the thirty-minute duration. They would report that objects were in a Y-formation much the same as other witnesses. However, perhaps because of their vantage point, they were able to tell that the lights appeared to be individual components as they moved freely of each other, although they stayed within the boundaries of the formation.

Another witness, Mrs. Vinogradova, along with her husband would witness the events from the second floor of their Greifswald home. The pair were at first disturbed by the sounds of a commotion from children in the street below. So noisy were they, that Mrs. Vinogradova went to the window to see what the fuss was about. In front of their house, around fifty people – a mixture of adults and children – stood looking upwards at the sky. She followed the group’s gaze and soon saw for herself the “two luminous groups of lights” overhead. She would call her husband who saw them also. They too would report the lights moved independently of each other. 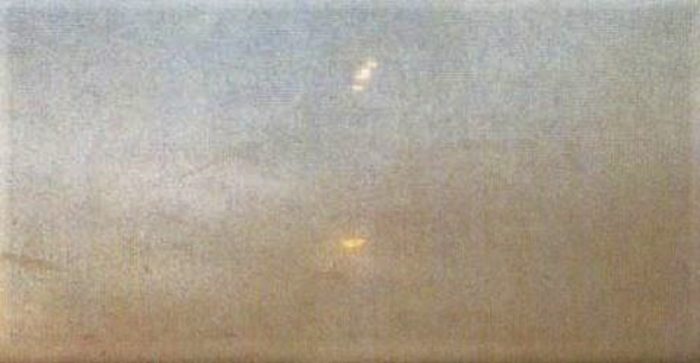 Rainer Ladwig was walking along the beach in Trassenheide when he witnessed the two separate formations. The time was around 8:40 pm. He could clearly see a ring-formation and the Y-formation, as observed by the schoolboys and their teachers. What’s more, his wife and family were with him and also saw the strange lights. Ladwig would capture several pictures of the formations, a number of which would show very definite structures and were considered excellent for analysis by UFO researchers.

Perhaps one of the key photographs taken by Ladwig was one that showed clearly the reflection of the lights upon the water below. This was proof that the sightings were not an optical illusion or a mirage from the water’s surface. Furthermore, the fact that residents in Neubrandenburg could also clearly see them, which was over sixty miles away, was proof that the objects were not weather or hot-air balloons.

Another witness, Mr. Luchterland, was driving with his family near the nuclear power station in Greifswald. At 8:45 pm, he and the vehicle’s other occupants saw the dazzling display in the skies above them. He would manage to film the formation for several moments on his video camera.

Another fifteen-minute piece of footage was volunteered to the media by Mr. and Mrs. Groeschel. The married couple were holidaying on the Isle of Usedom on the night of the sightings. From their accommodation in Uckeritz, they witnessed almost the entire sighting. His footage would capture the Y-formation moving towards Peenemuende which, whether of significance or not, was where the V-2 rockets were produced and tested.

A pilot, Gerald Drape, would submit several photographs of the light formations. He would also volunteer that due to the “specific flight movements one must conclude that these objects flew under intelligent control”.

One specific point of interest witnessed and reported by multiple people was a “sudden flash” which occurred at the same altitude as the Y-formation. This was also captured on several of the pieces of footage and so was able to be timed at 8:47 pm. Many witnesses would state how it appeared to be an explosion of some kind. However, no noise accompanied the bright light.

There has been much speculation as to what this flash may have been. It is estimated to have been at least four times as large as the individual lights themselves. Might it have been a portal or wormhole used by these strange crafts? Other theories suggest the East German National People’s Army fired upon the lights. Although they would deny any such action, they were performing “military maneuvers” in the area on the night in question.

A little over ten minutes after the flash of light at just short of 9 pm, the objects began to fade away from sight. They would do this one after another, apparently in a predetermined order as opposed to simple randomness. Despite numerous investigations into the incident by many UFO researchers, the sighting is still unexplained.

The video below features some of the footage of the Greifswald Light incident.

UFO Hot-Spot Over The Baltic Sea?

The entire Baltic region has a long history of UFO sightings. We have previously examined the case of Daniel Leger who would meet an apparent female alien pilot in the Polish Baltic coastal region of Gdynia during the Second World War.

More recently in 2014, just off the coast of Stockholm in Sweden, a circular craft suddenly broke out of the waters of the Baltic. It hovered for several moments, turning steadily as if scanning its environment. It then crashed back beneath the icy waters. Swedish authorities would treat the matter seriously enough to send a search team to scan the waters. In fact, the operation was one of the biggest mobilization of Swedish forces in decades. They didn’t, however, find anything significant.

Two years after the apparent sighting off the Swedish coast, an anomaly was discovered under the Baltic Sea. A distinctly round-shape was visible on the bottom of the icy stretch of water. Initial tests would indicate extremely high levels of titanium which, coincidentally or not, would be a material ideally suited for space-faring vehicles. This is due to its unique blend of strength but also lightness. As you might imagine, many skeptics dismiss the findings and see no need for further investigation. Others, however, continue to study the anomaly.

The short video below features a more detailed look at the alleged crippled craft at the bottom of the Baltic.

Tags mysteriousworld The Greifswald Lights Incident – A Last Sighting Of The Cold War?