In Finland in the early-1970s, two of the most fascinating encounters involving humanoid entities took place. What’s more, both incidents featured more than one witness. However, the credibility of each is largely split down the middle by subsequent investigations by various UFO researchers. Although not so much that the two cases can be dismissed entirely.

The incidents in question happened just over a year apart from each other at locations separated by 300 miles. Each of the main sightings occurred in the late-afternoon as opposed to late evening or night time. And furthermore, descriptions of the apparent humanoids from another world were remarkably similar to each other.

We have written briefly about the first incident before due to the presence of a strange black box – a detail that shows up in many UFO reports, and seemingly an item of unknown significance.

On the afternoon of 7th January 1970, at around 4:45 pm near the small village of Imjarvi, Woodman Heinonen, and Esko Viljo, were each skiing down one of the snow-covered hills in the region towards one of the glades they would use as a resting spot. Although it was not yet dark, the sky had taken on a dark-orange glow announcing the immediate arrival of the night. A few stars were already visible and the sky itself was clear and cloudless. Perhaps more importantly to their immediate health, it was cold and rapidly getting colder, below the minus mark.

As they were resting and catching their breath a buzzing noise suddenly became apparent to them. As did the strange light moving quickly across the darkening sky. Each watched the object as it approached their location. As it moved closer, it also descended. The faint buzzing was now considerably louder, proving this other-worldly object was the source of the noise.

Suddenly, the craft stopped its descent and hovered. A “red-grey mist” appeared to cloak the object, moving in a swirling motion. The descent began again, only much slower. They would describe the craft as round or disc-shaped but with a flat underside. It also had the appearance of a metallic exterior. The object would halt its descent at around twelve feet, so close that Heinonen would claim, “I could have touched it if I had reached up with my ski-stick”.

Heinonen would further claim that the top of the craft featured a dome and “three spheres or domes spaced equidistantly” along a raised part on the lower edge. In the middle of the underside of the craft was a “projected tube”. As the men watched, “an intense beam of light” suddenly flashed from this tube, directly downwards.

“Something Pulled Me Backward!”

This light would illuminate the snow on the ground before disappearing again. This was repeated several times. It was as the two men watched this bizarre light display that Heinonen had the sudden feeling that “somebody had seized my waist from behind and pulled me backward”. It was then that he saw “the creature”.

Standing in the middle of the beam of light was a small humanoid, about three feet in height. In its hands was a dark, black box. He could see a “yellow glow” that seemed to come from inside of the box. The creature was dressed in a green overall-type outfit and what skin was exposed was pale “like wax”. The arms and legs were extremely thin, while on its feet were a pair of green boots.

Viljo would recall that the frame of the creature was “like a child’s” and that it wore a “conical helmet” on its head which was “shining like metal”.

Without warning, the creature turned the box towards Heinonen, pointing it towards him as if it were a weapon. A red-grey mist formed out of nowhere and “large sparks started to fly from the illuminated snow”. Many of these would hit Heinonen but they did not cause any injury or pain.

Viljo would recall how “the sparks were shining in several colors”. As this was happening, the creature was no longer visible. The thick red mist covered it entirely. Then, without warning, “the beam melted, flew up like a flickering flame and was sucked into the gap in the craft”. The mist, the light, and the creature were now gone.

Heinonen, however, was unable to move his right side following the incident and his friend would have to assist him in their journey home. Although this paralysis was only temporary, the incident would have a profound effect on Heinonen. He would report numerous sightings following the initial encounter. One of these was a meeting with a blond alien who he attempted to photograph which, in turn, caused her to “disappear”. While many cite these subsequent claims as reason to dismiss the Imjarvi incident entirely, other witnesses that evening would suggest the encounter to be true.

Around ten miles away in Paistjarvi, Elna Siitari was doing chores on her farm when she saw an intensely bright light in the direction of Heinonen and Viljo’s location. The time of the sighting was just before 5 pm. Just over six miles away in Paaso, a young boy collecting firewood before it became too dark to do so would see the bizarre bright light also.

Perhaps an even more bizarre incident happened in the summer of 1970 when the two men, along with a Swedish journalist, a photographer, and an interpreter went to the location of the incident. As they stood talking, each of the three visitor’s hands suddenly glowed an intensely bright and unnatural red. At the same time, Heinonen suddenly experienced an intense headache, much like the one he experienced in the aftermath of the sighting. Needless to say, the expedition was cut short.

The sighting is still unexplained. And regardless of Heinonen’s later claims, the incident of 7th January 1970 remains open to investigation.

Although there have been claims of a purposeful hoax since, the encounter of February 1971 in Kinnula remains to some a genuine encounter that hoaxers wish to claim. And furthermore, while history remembers the second sighting and takes issue with it, a sighting that is little-known and occurred only days previously would appear to corroborate the incident.

Shortly after 8 pm on 2nd February 1971, Sinikka Kuittinen and her friend, known only as Mrs. Manninen, were driving towards Oulu in the Kiiminki region of Finland. As they did so, each had noticed a strange light behind them in the night sky. As they continued to watch, the light suddenly rushed towards their moving vehicle. It then proceeded to keep pace with them, cruising along on their left-hand side.

They would bring the car to a stop near a field at the side of the road. Suddenly, the light vanished. In its place, however, was a strange, three-foot tall creature. It adorned a helmet and a “brown-green” suit. The strange creature crossed the road in front of them and disappeared into the woodlands opposite the field. Not wanting to stay, Kuittinen slammed her foot down on the gas pedal and didn’t remove it until they reached their destination of Oulu.

Neither of the women would report the incident initially. Not until the apparent encounter, in the same region, on 5th February that is. 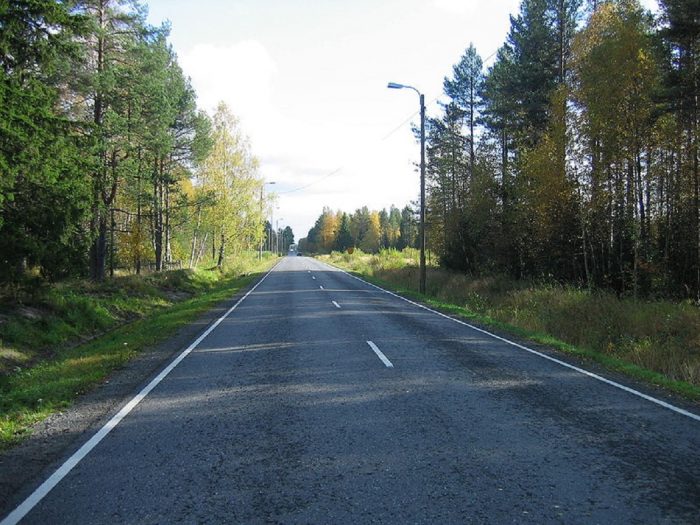 Incident In The Forest

As the snow continued to fall well into the late afternoon of 5th February 1971, lumberjacks, Petter Aliranta and Esko Sneck finally decided they were done for the day and began to pack up their equipment. It was only a little after 3 pm, but the sky was a gloomy white and the snow showed no signs of abating. As Aliranta turned off his industrial-style chainsaw, he noticed a metallic object hovering just above the trees.

The object was like “two saucers on top of each other”, with what appeared to be four “legs” on its underside. It began to descend towards the forest floor. As it did so, a circular window or doorway opened on the bottom of the craft. It continued downwards, seemingly coming to a stop in a small clearing around fifty-feet in front of them.

The lumberjack continued to watch the scene as his partner finished his last cut of the day and was unaware of the bizarre event unfolding behind him. From the circular gap, a three-foot humanoid creature, dressed in a one-piece green outfit emerged. The creature appeared to be wearing a helmet with a faceplate – similar to a scuba divers facemask. As soon as the creature touched down in the snow-covered forest floor, it began to make its way towards the two men.

The movements of the creature were “similar to an astronaut’s motions on the moon” as it appeared to jump or hop towards them. At this moment, Aliranta flicked the switch on his chainsaw. This, it seemed, alerted his fellow lumberjack, who looked up to see the bizarre entity heading in their direction. 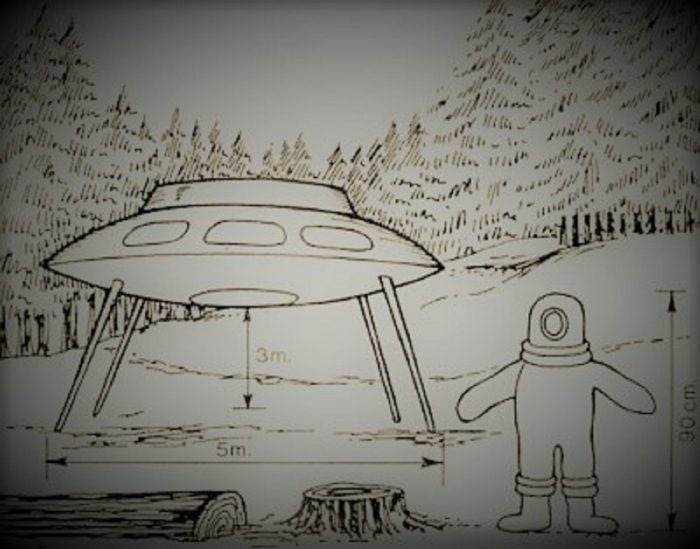 Sketch of the Kinnula Incident

For reasons he couldn’t later explain, Sneck advanced towards the humanoid, his chainsaw still switched on, held out in front of him as if ready to attack. The creature continued on several more feet until finally it turned and headed back towards the saucer-like craft.

Aliranta moved forward now also, joining Sneck as he advanced towards the craft. As each man got closer to the cosmic vehicle, they could see several other humanoid creatures inside. The craft suddenly began to hover slightly above the ground as if expecting the arrival of the creature. Aliranta lunged forward and grabbed the heel of the strange figure in an effort to stop it boarding. When he did so, however, a jolt of pure pain, like “hot iron” entered his hand. According to reports in local newspapers at the time, the wound would remain volatile for several months.

Needless to say, he let go of the creature, who then motioned itself upwards and into the craft. Gusts of air began to swirl around the clearing as the craft began its rapid ascent. Within a matter of seconds, it had vanished. There were several markings in the snow following the craft’s disappearance, but nothing else remained of the visitor’s presence. Each of the men suffered a mild form of paralysis in the minutes following the encounter and would not be able to leave for around an hour.

The incident would attract the attention of both national and international media, as well as numerous UFO investigators over the years. Opinions remain divided.

The short video below looks at the incident a little further.

Previous The Serpent Gods – A Connection Between Dinosaurs And Aliens?
Next Project Sigma And Conspiracies Of The Greys