AUFO sighting late one evening over Makena Beach in Maui, Hawaii in the summer of 1999 not only had multiple witnesses, but it shares details with similar incidents in our contemporary era over the Pacific islands.

What’s more the encounter – while only a sighting with no signs of missing time or any other direct interaction – was of an object so large and at such a (relatively) low altitude, that descriptions of it are perhaps some of the more detailed in terms of the craft’s material make-up and energetic properties. 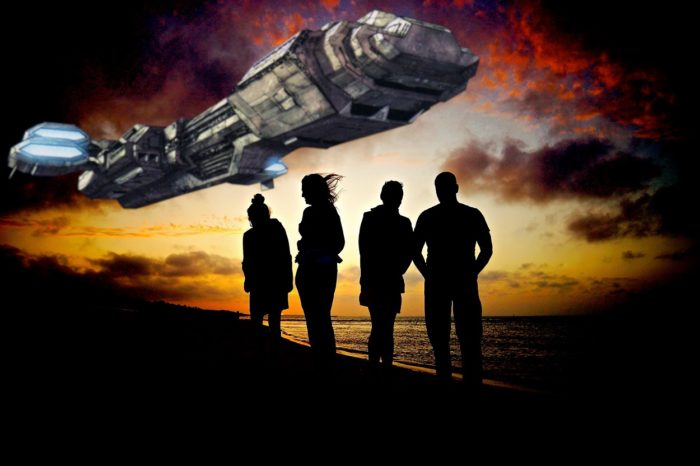 Just what happened on the Makena Beach?

Despite this, and the immediate newspaper coverage awarded to the sighting, it was quickly forgotten and dropped from the media platforms. In fact, the abrupt suddenness with which this happened has all the signs of other similar cases – both in the United States and the United Kingdom – where an apparent “third party” has put pressure on such media platforms to withdraw their interest in such accounts.

Whether that was the case here or not is open to debate. However, sightings over the islands of Hawaii continue today. And the Makena Beach sighting – now two decades old – remains without a satisfactory explanation.

A Late-Night Beach Party That Took A Strange Turn

The witness and several friends had spent the evening of 8th August 1999 on Makena Beach celebrating two of their groups’ birthdays. The evening had gone without incident until around 11 pm when, with their fire still blazing on the sand, strange lights appeared in the sky in the distance.

As the lights approached, the witnesses believed they were nothing more than a plane approaching Maui airport. However, when they turned and began in the direction of the group, they realized something extraordinary was unfolding right in front of them.

The small group watched in awe at this bizarre aerial display. It was, according to the main witness’s later descriptions, a “long tube-like” object with eight sides. Perhaps most startingly were the details that there were “many darting lights” moving around what appeared to be the end of the craft. 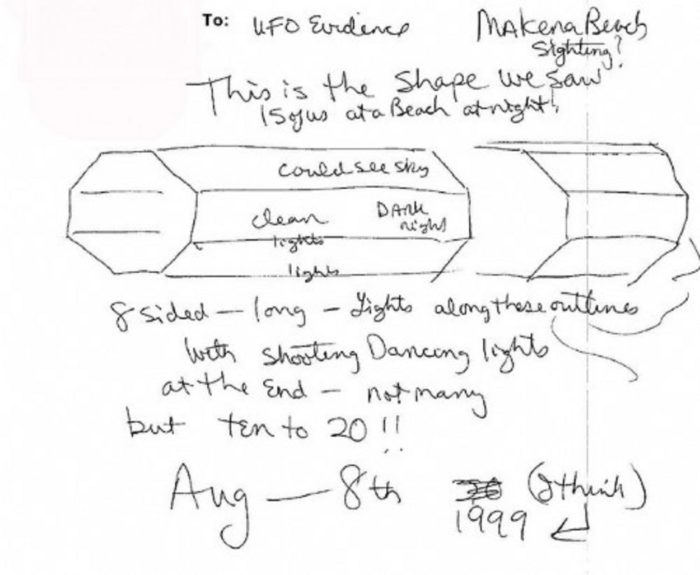 A witness sketch of the strange craft

What’s more, the witness would discount any assertion that these objects were meteorites as they were visible to them above the craft. Even stranger, this futuristic craft appeared “translucent” although at the same time “had lights all along” the side. The witness would further state they could “see starts through the long shape” as it passed overhead. He would further claim:

It was like it was outlined in bright neon light, but you could see through it!

Each member of the group was overwhelmed by the behemoth-like size of the object. So much so, many of them would admit to feelings of fear running through them during the close proximity sighting. It would soon move away from the small group and out of sight into the distance. However, it would come to light to the group that other residents of the island witnessed the bizarre object also.

A Brief Buzz Around “The Whole State” Following The Incident

According to the witness, “the whole state was a buzz for days” following the sighting, which was witnessed by multiple other people on the island. Then, rather strangely, there was absolute silence regarding the incident. Aside from the witnesses who would quietly speak of the incident among themselves, there was no official reaction or statement on the sighting.

Furthermore, when the main witness – who was an “inter-island sales rep” – would speak to a resident from Kauai who claimed that he and many others had witnessed the same craft on the same night in question. 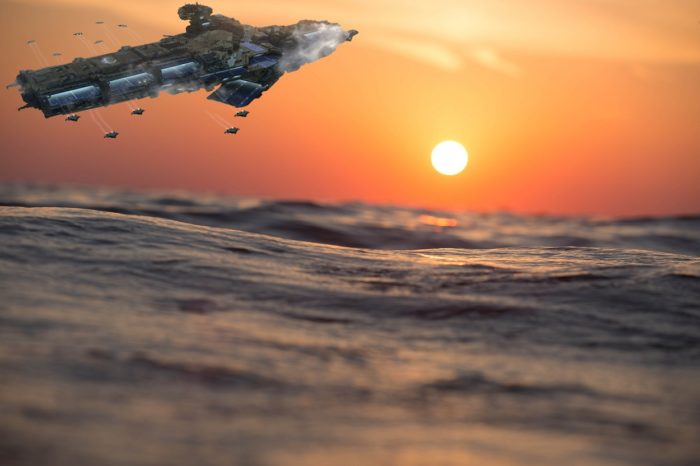 A depiction of a UFO over the water

Several weeks later, and unable to contain his curiosity and frustration at the imposed silence on the encounter, the witness would approach a representative for the Large Telescope company at the opening of the (partially military-funded) Super Computer site. He would ask them bluntly why they (the government) wouldn’t simply admit what everyone on the island already knew. That the object witnessed that August evening was a legitimate UFO.

Whether we should take the alleged exchange with a pinch of salt or not is perhaps open to debate. The reply, however, after attempting to dodge the question, was that “the public couldn’t handle the news”.

Needless to say, the incident remains unexplained. And, as is usually the case, will likely remain so barring a release of official information. Or, of course, other witnesses from the night in question coming forward.

Another UFO Sighting “Many Years Earlier!”

The incident in the summer of 1999 wasn’t the witness’s only encounter with a strange unidentified object. Although the exact date is unknown, the witness would claim that “many years earlier” while in Kanaio (on the other side of Maui) they witnessed a “three lights” flying overhead while he lay in a hot-tub looking up at the dark evening sky.

The lights were a distinct blue color and captivated the witness who watched them for several minutes. Then, without warning, the relaxing journey of the glowing blue orb-like objects took on a more frantic feel as they sped up in an instant. Even stranger, they would change to a glowing red color in the process. 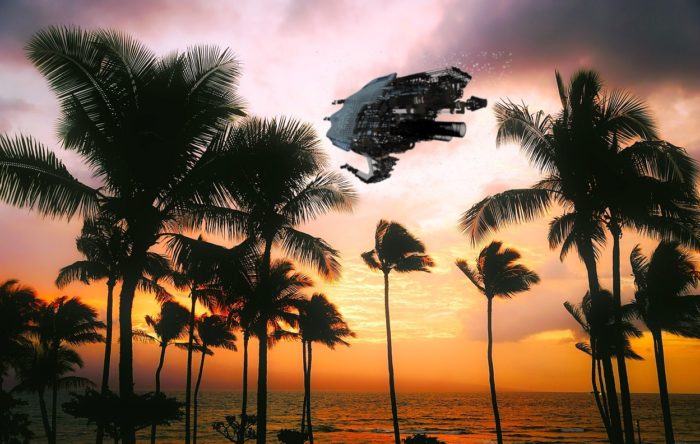 A depiction of a UFO over the beach

This is an interesting detail. And one we have noted numerous times before in relation to the changing of a light’s color in sympathy with its respective speed. This would seemingly be the case here. And that it is volunteered as an afterthought to the main report should perhaps alert us to the increased chances of it being credible.

Whatever that particular sighting might have been, or indeed what the tube-like object over Makena Beach in the summer of 1999 was, both incidents remain without explanation. They are, however, far from the only UFO incidents to take place over or near the islands of Hawaii.

UFO Picture “Creeps Out” Photographer So Much He Had To Report It!

A UFO incident would again drag Hawaii back into the news in more recent times. A local resident in Waikane captured an orange disc-shaped object in the mountainous terrain of the region in Kaneoha Bay.

The incident occurred during the day on 23rd October 2016 while the anonymous witness was taking pictures of the area using the “multiple photos” option on his camera. Consequently, he didn’t see the object with his naked eye at the time of the incident. It was only later when going through his pictures that he saw the bizarre anomaly. You can see that picture below. 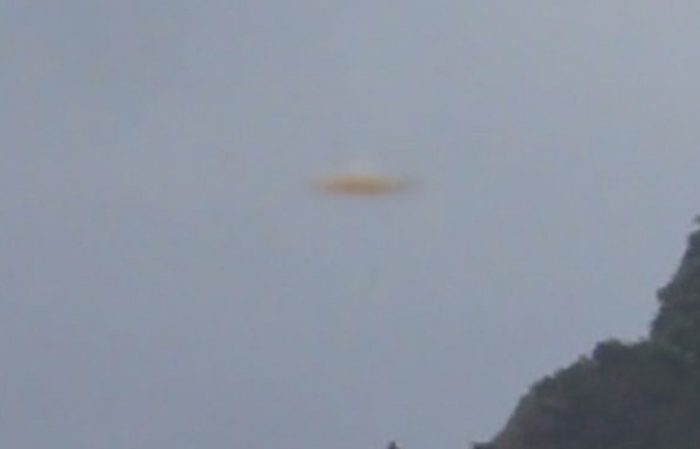 Does this picture show a UFO?

He would report the picture to the Mutual UFO Network (MUFON) and state in his report that:

I noticed one of them was not like the others… and I realized I had spotted a UFO… I don’t really believe in stereotypical UFOs. But this creeped me out so much that I’m reporting it just in case!

The witness would further continue that the disc-shaped object had an orange-red tint to its exterior. It also appeared to have a “dome on the top as well”.

The description of the craft and the picture itself appear authentic. However, the director of the Hawaii branch of MUFON would issue caution. There could be “many camera-lens anomalies” that may be responsible for the “object”. That being said, it is an intriguing image.

UFO sightings along coastlines or near large bodies of water perhaps project (potential) credibility. Such sightings over mountains achieve the same ends. In part due to the many conspiracies of alien bases residing in these naturally elevated plateaus.

Natural Disasters, Alien Bases, And Hotspots – Still Much To Understand!

With the above in mind, we should perhaps consider the claims of UFO researcher, Nigel Watson. In February 2018, following his commentary, he would find himself on many of the mainstream media platforms. Perhaps not least as Watson would claim there was a direct link between UFO sightings and earthquakes. Hawaii, incidentally, experienced – albeit a “tremor” – just such an earthquake several weeks earlier. And following just such a sighting only minutes before.

Indeed, we have examined before the possible connection between strange activity – including UFO sightings – either just before or just after natural disasters. There very well could be, in many of these cases, more rational explanations. Perhaps involving weather and atmospheric phenomena. Several of these sightings, however, appear to defy such explanations. Is there a connection between these “natural disasters” and UFO activity? And if so just what might the reason for such manipulation be? And, might it one day cause a disaster of cataclysmic proportions, intentionally or not?

While they are all speculative there are many reasons why such UFO sightings occur near or over Hawaii. Not least its location off the west coast of the United States. This location sees more than its fair share of UFO activity. When we then add in the claims of underwater alien bases, then it is perhaps no surprise that Hawaii – surrounded by the Pacific waters – also has a long history of strange sightings, bizarre activity, and multiple conspiracies like those touched upon above.

Much like the many other UFO sightings and hotspots, our ability to understanding them will undoubtedly lead to a greater understanding. Both of them and the other persistent mysteries of humanity’s collective existence.

Check out the video below. It looks at just why these apparent aliens might be visiting our planet.