The Persistent Mystery Of The Hessdalen Lights

In the small rural village of Hessdalen in central Norway, a seven-mile stretch of valley is home to mysterious lights that both locals and UFO researchers have witnessed and studied for decades. Usually of a white, red, or yellow color, the lights have appeared in the valley persistently since the early-1980s.

Beginning in the summer of 1983, Project Hessdalen was established, with a view to finding out what was behind this strange phenomenon. Whether the lights are intelligently guided crafts, or the result of natural phenomena is still unknown. And while the sightings have decreased from their initial surge between 1981 to 1984, steady sightings of them continue today. One report of the study of UFOs in Norway would state that, on average, two-thirds of UFO reports each year are from the Hessdalen valley region.

Before we look at some of these sightings in a little more detail, check out the short video below. It goes over the basics of the Hessdalen Lights phenomenon.

Initial Wave of Sightings Over Hessdalen

Reports of sightings over the Hessdalen valley began in late-1981. On 1st December several sightings were reported of a “bullet-shaped object” as well as a sphere and several strange lights. The lights were heading over the valley, to the north in the direction of Trondheim. Around six weeks later, on 18th January 1982, came another sighting of a strange light which appeared to “tilt slightly up and down along its course”.

On 11th February, a sighting by an originally skeptical journalist, Arne Wisth, would change his mind on the lights over Hessdalen. He had arrived in the area to write a small, dismissive piece on the sightings. That was until he witnessed the lights for himself. He would state that “a star came towards us” as he and other witnesses stood near Rohovde Mountain. It moved with “tremendous speed” and as it came closer he could see it appeared to be growing in size and intensity. Suddenly, it stopped, remained motionless, before sinking a little closer to the ground. Wisth managed to take a picture of the strange light. However, by the time he had clicked the shutter a second time, it had vanished from sight.

Wisth would witness the lights again exactly a week later, on the 18th February. Again, he managed to obtain photographs and had around thirty witnesses at his location, all eager to catch a glimpse of these bizarre events. On this occasion, the lights would “pulsate” and change colors several times. Around twenty minutes after the lights had vanished, a “long red-white luminous” shape came into view. It moved slower than the previous light, and closer to the ground in-between the Fjellbekkhogda and Finsahogda mountains.

The Sightings Of Leif Havik

One of Norway’s better-known ufologists and writers is Leif Havik. He too was witness to the initial sightings of lights over Hessdalen. During a four-day expedition in the region beginning on 17th March, he and his team would witness six separate incidents.

The first of these occurred a little after 7:30 pm on the first evening. The team had placed their equipment on their transport ready for the following day. With the dark and cold closing in around them, they were preparing to set out to their base – a hut on the Varhusvollan Mountain. Suddenly, Havik’s colleague, Lars Lillevold would cry out “There it is!” All of them could see it. An oblong object that “slowly passed in front of Finnsahogda Mountain”. Each watched in awe, as the object continued on its way into the valley, noting how silent it was. With no time to unpack their cameras, they made their way to the mountain hut for the night. Shortly after arriving, however, at 8:39 pm, another luminous object passed over the valley. That the sightings were real was obvious to them.

The following evening, again at just after 7:30 pm, the oblong-shaped object appeared once more. It sported a red light at the front, and then two white-yellow lights separated by a “dark patch” at the back. It would pass over the group of onlookers at a low-altitude and was visible for around forty-five seconds. Almost exactly twenty-four hours later on the 19th March, a “star” appeared suddenly in the night sky. At first, the group watched, unsure if this object actually was a star. After several moments, however, it “assumed a warmer yellow-white color” and would grow in size. It would pass over the crowd and take the same route as the previous two evenings.

Following a relatively quiet period, sightings of the mysterious lights would begin again on 3rd September 1982. An object, which as before appeared to be nothing but a star, began to move in a “zig-zag” fashion in the sky. Several pictures were taken, but they failed to reveal anything of consequence. On 25th September, once again just after 7:30 pm, came another sighting, this time over Heggsethogda Hill.

As before the brightly lit object would move slowly over the valley. On occasion, it would stop and hover motionless and a “beam” would project downwards, illuminating the area beneath as it did so. Some observers would fling themselves to the ground, fearing what the light beam might do if it hit them. Then, without warning, the light made its way from the onlookers and into the night sky and out of sight.

These sightings would continue for the remainder of 1982, through 1983 and into the summer of 1984. For all the photographs, however, none could offer any real insight into what the objects were. That didn’t stop researchers and UFO enthusiasts from keeping various nightly vigils in the area, however.

By January 1984, Project Hessdalen would set up its first major “stake-out” of the region. Running from 21st January until 26th February there were reports of multiple sightings. Usually of red or yellow-white lights. It would appear the bulk of these sightings also occurred within a three-to-four-mile radius over the valley. One of the last sightings of this initial wave took place on 6th September and featured a blue light that hung motionless to the south end of the valley. It would remain there from just after 9:30 pm until 6 am the following morning. 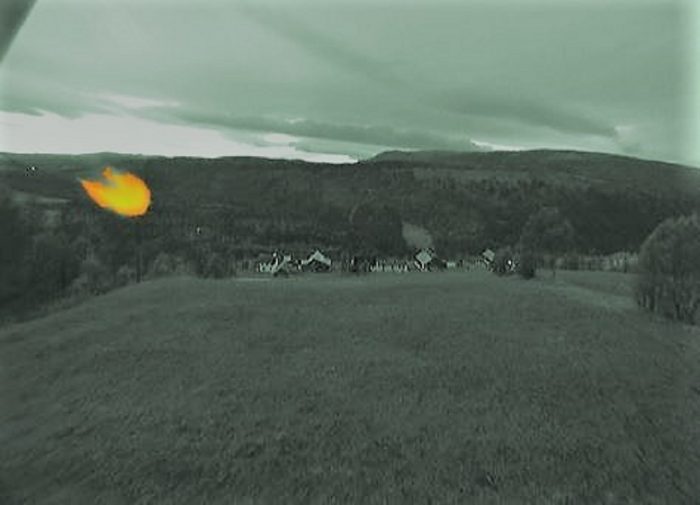 Although sightings would continue into 1985, they would begin to become less frequent. Project Hessdalen would send another “party” to the region in January 1985, and while they did witness several similar sightings to those of the previous years, they were still no closer to offering an explanation for them. Nor, for that matter, was anyone else.

Sporadic sightings occurred again in the mid-1990s, including one of an “orange ball of light” captured on video on 22nd February 1995. Another similar sighting occurred almost exactly a year later, on 23rd February 1996, when two UFO enthusiasts ventured to the Hessdalen valley hoping to “see the phenomenon for themselves!” At 10:50 pm, Jan Barwin and Andreas Olsen did indeed witness a strange white light in the distance. Olsen would view the object through his telescope, observing that it featured a “blinking white light on the right side”. It suddenly moved for several seconds, before remaining motionless again. It would then repeat this motion several seconds later. By the time Barwin passed the telescope back to Olsen, it had vanished.

Another report surfaced in August 1997 as two witnesses saw strange lights over Lake Oyungen a half-hour before midnight. Arne-Johan and Pal-Andre Rauan would describe a “big star which moved rapidly” from south to north-east.

Another permanent scouting mission was set up to run from 1997 into 1998 named “The Triangle Project”, and following that, in 1998, the “Hessdalen Automatic Measurement Station” went into operation. This automatic recording and logging system would record regular “anomalies” of strange lights in the region at a similar pace to the sightings of 1981-1984. There was, however, still no explanation to be found.

So, what might the lights over Hessdalen valley be? If they are UFOs under intelligent control, then what is special to them about this region? Might there be a base within one of the mountains (as claimed in other mountainous regions of the world)? Might there, in fact, be a portal? One that allows travel between our part of the universe and another?

Or might the explanation be a little more conservative? Many theories, for example, revolve around tectonic-type energy created by frequency waves and elements within the ground. Others point to the possibility of “cosmic ray particles” meeting in this particular region, creating the “lights” that are witnessed there. Another theory points to the scandium deposits in the area, which could lead to the combustion of oxygen, hydrogen, and sodium. This, in turn, would create the “light effects”.

More recently, radio astronomer, Jader Monari, would propose a similar theory. His research would show that one side of the river that runs through the valley is rich in zinc and iron. On the other side of the water, it is rich in copper. Using experiments under the same conditions, Monari would show that electricity would “flow” between these deposits, using the water as a conduit of sorts. This reaction, according to Monari, will likely cause electromagnetic fields to form overhead, which will cause “orbs of light” to appear temporarily.

While any one of the above theories could explain the lights, specifically Monari’s, it doesn’t answer why sightings began so suddenly in the early-1980s. One would assume, if we accept such theories as Monari’s, that given the natural elements involved, this phenomenon would have occurred and been recorded for centuries. For now, the research and investigations continue.

The video below looks at these mysterious light a little further.

Tags mysteriousworld The Persistent Mystery Of The Hessdalen Lights