An apparent landing of a UFO in the summer of 1966 at the Presque Isle Park in Erie, Pennsylvania is one still spoken of and researched today. The incident would unfold in front of multiple witnesses. And would have several secondary corroborating witnesses further to that. Furthermore, at least two of those present would encounter much more than just the landing of a strange alien craft. A strange humanoid whose description would match that of a “Bigfoot-type creature” would approach these witnesses. Another example of a UFO case with connections to this legendary but apparently Earthbound entity. 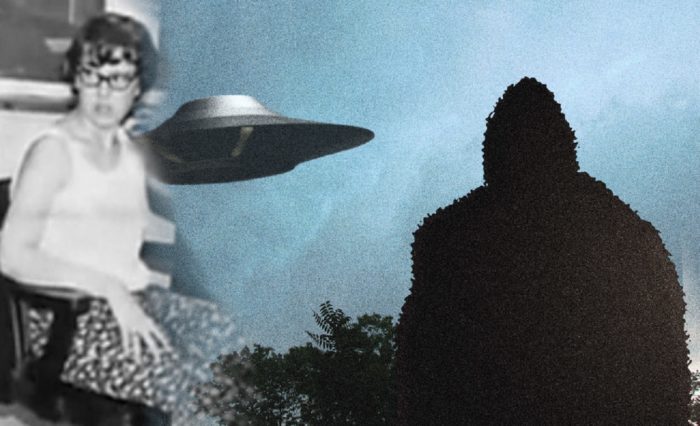 One of the most respected paranormal journalists of his time, John Keel, would conduct one of the initial investigations into the case. However, a plethora have taken place since. And despite a person stepping forward with claims of an apparent hoax three decades after the incident, as we will see, these claims themselves don’t appear to hold water. It is a case that continues to intrigue and fascinate those in UFO circles, as well as those with an interest in cryptozoology. Yet another case that leaks into multiple and largely believed to be unrelated fields of interest.

Incidentally, while there is no doubt of the incident taking place, some of the finer details appear to have been corrupted over time. For example, some say there was a fifth, unnamed witness in the vehicle. Others still claim that two children belonging to one of the witnesses were also present. We do not mention these from here on in, and instead, settle on the main witnesses. And particularly the two who wished to report and investigate the incident.

A little after 7:30 pm on the evening of 31st July 1966 three friends, Douglas Tibbetts, Betty Kelm, Anita Haifley (and Gerald Labelle who we will come to in a moment), sat in their stranded vehicle. It was bogged down in the sand of a deserted beach in Presque Isle Park after they had ventured out this way to enjoy a picnic in the secluded area of the park. They had made attempts to free the vehicle. However, with skies beginning to darken, Gerald would offer to walk to the park offices so as to alert park officials to their predicament. The remaining three would simply sit in the car and wait. Just after 9 pm, however, the monotony of the situation was about to be broken.

Out of the lightly-darkened early evening sky, a “square or hexagonal” object emerged into view. It moved from side-to-side in a very erratic manner but then would suddenly stop around ten feet above the surface of the beach a little over 400 yards away from their car.

There were lights, or the appearance of lights, around the edges of the object that appeared to “sweep” the area below. It then began to descend onto the sandy surface, eventually landing behind the trees. Betty would later claim to the ‘Eire Times’ newspaper, “The car vibrated. I know we saw it. We had taken a walk in that area earlier. There was nothing between the trees then”.

A strange array of orange and yellow lights began to project into the woodland that surrounds the beach at its edges and provided its ultimate privacy.  Betty would state, “It lit up the whole woods in the path. It wasn’t like a searchlight. There was light along the ground. Along the whole path”. 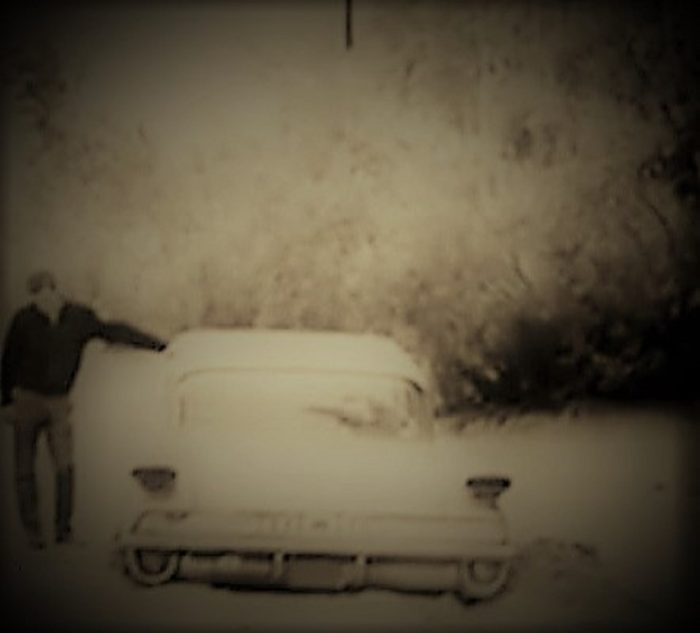 A Tall Humanoid With A Bigfoot-Type Outline!

Before the landing of the UFO a Park Police patrol car had witnessed the struggling youths attempting to free their vehicle. Although Gerald was already on his way to obtain assistance, the two park policemen offered to drive by the location again once they had conducted their rounds of the park. If they were still there and their friend (Gerald) had not yet returned, they would assist them. The two officers in question, Ralph Clark and Robert Loeb, arrived just after the strange craft settled on the ground behind the trees. And at the very moment the light went dead.

As soon as they made their presence known to the trapped picnickers did they blurt out the details of the incident to them. Douglas would offer to take the officers to the area where the strange craft had come down to the ground. The officers allowed him to lead them while the two young women would remain in the car. Betty would position herself behind the steering wheel. She kept her focus on Douglas and the two officers, only losing sight of them when they entered the woods. However, within several seconds of their disappearing, a strange creature emerged from the woodlands into the clearing in front of them.

At first, the already nervous young woman believed it to be an animal who called the woodlands home. However, as it stood upright, she could see it was clearly over six feet tall and was humanoid although similar to a strong gorilla in outline and shape. Whatever it was, it was heading in their direction. It would at first appear to circle the vehicle. Then, it came closer. Much closer.

A Clumsy Retreat And Take-Off!

As this strange creature ran what appeared to be claws over the vehicle, Betty pressed repeatedly on the car horn. Although she was attempting to get the officer’s and Doulgas’ attention, the rapid, loud noise appeared to scare the strange creature. It would clumsily retreat back into the trees. Several moments later the craft “rose into the air” from behind the trees. It would then shoot into the night sky at unbelievable speed.

A minute or so later, Douglas with both of the park police officers emerged from the trees and ran towards the car. All could clearly see the panic on the young women’s faces. In fact, it would take each of them several moments to contemplate the moment and settle back down. Although Betty would relay what happened, Anita remained in such shock she refused to speak about it. She would also refuse involvement in any further investigation into the incident over the years that would follow.

By the time the witnesses arrived at the Park Ranger offices, several more armed officers had arrived at the scene. In small teams, they would enter the woods to search the area. Douglas’ car remained where it was for the rest of the evening. Authorities would prevent him from retrieving it until the following morning. Interestingly, the park officers noticed distinct “claw marks” on the vehicle. All four witnesses would insist no such damage was on the car when they had set out for the park that morning.

Shortly after 7 am the following day on 1st August, the case had not only aroused the interest of the State Police, but also the United States Air Force, both of which would have representatives in the area.

An Official Search Of The Area

An extensive and thorough search of the area once daylight claimed ownership of the surroundings would reveal some interesting details. As the witnesses had claimed, around 400 yards in front of the steadfast vehicle were strange impressions in the sand. About ten feet apart from each other were two “diamond-shaped imprints”. In another nearby location lay a similar set of imprints, this time in a triangular position. Leading from the site was a set of “conical” tracks, which didn’t appear to be footprints, but which did lead straight to the car.

After taking official statements from the witnesses, Betty would undergo an evaluation from a psychiatrist who would state her testimony appeared to be credible. She certainly didn’t appear to be of unsound mind.

UFO researchers and investigators would swarm to the area over the coming weeks. While Betty and Doug would happily and patiently answer their questions, the other witnesses wished to remain out of any further interviews or statements. Despite the hopes of such enthusiasts, a similar sighting didn’t occur. The case, however, remains in the conscious of the local area. As well as firmly on the radar of UFO researcher far and wide.

The Revelations Of The “Other” Witnesses

While many contemporary reports mention the witnesses at the scene itself, there were also several other witnesses from the nearby area that witnessed the UFO in the skies overhead. In fact, the ‘Eire Times News’ mentions that “Eight Others See UFO” in its headline and goes on to give details of these.

For example, Steve Lupe would claim to be with three other friends on another nearby beach area of the park. They would all witness a strange object hovering overhead at around 8:30 pm. Another local resident, Stephanie Mango, would see the strange object also claiming it “flew silently” just above the trees. It would suddenly change course and then disappear from sight.  Two French exchange students, Helena Roche and Alain Orcel, were driving along the highway around a mile away from the incident when they witnessed a “lighted silvery object”. It moved silently and at a low altitude.

Perhaps one of the most intriguing of these other sightings would come from three young girls – Sue Karie, Linda Henderson, and Janice Dickey. They were enjoying a sleepover in Sue’ family’s back yard. At around 11 pm, all three would notice a “silvery object” pass overhead. Sue would later state the object made a “whistling sound”. What’s more, it scared them so much that they ran into the family’s station wagon, locking the doors behind them. They remained in the car until the object – which would “fade in and out” of sight – disappeared.

You can view a news report on the incident below. It features a report from Brian Sheridan, a respected national and one-time local journalist.

Hoax Claims – A Sufficient Explanation? Or A Case Still Unsolved?

Following the report by Sheridan, a person would discreetly contact him claiming the entire incident to be a hoax. This person would prove to be local resident and truck driver, Kim Faulkner. He would claim that he had bought a nine-foot-high hot air balloon from the ‘Boys Life’ Magazine. And he could show the publication and relevant advert. The balloon in question is still available for purchase.

Furthermore, Sheridan would state that “his brother confirmed the story” and that Faulkner, to him, appeared genuine. He would claim he didn’t wish to appear on camera at first and simply wished to provide the relevant information. While it doesn’t fully solve and close the case, Sheridan appeared at least partially convinced. He would state “it made the most sense of anyone we talked with at the time”.

You can view the video below.

While many, even some in the UFO community accept this apparent wrapping up of the events in Presque Isle Park that summer’s evening in 1966, some simply don’t. It might well be the case a child’s balloon set out that evening. But according to the research of some, its presence is mere coincidence. if indeed it is true. What’s more, it fails to address some of the finer details of the incident. Not least the strange creature and the claw marks.

For example, the paths of the balloon and the sightings of the witnesses didn’t appear to match entirely. Furthermore, the wind direction of the night in question – at least according to local archive newspaper reports – appear to suggest a balloon, let off from where Faulkner claimed, would have been taken away from the incident. The incident would appear to remain unsolved.

The video below, while slightly poor quality, features a reconstruction of the events.