Admittedly Manchester, England isn’t the first place that comes to mind when discussing UFO hotspots or waves of strange sightings. However, in recent years, many strange encounters have taken place in the skies over the city. And it would appear these incidents are actually increasing. While no doubt many of them, upon investigation, will prove to have explanations of a reasonable, if mundane nature, some will prove to be much more elusive in isolating just what these strange objects are.

One particular sighting in the summer of 2011 over the Denton area of the city was captured on film. The sighting appeared to take place around late-afternoon in early-July. A cigar-shaped object is clearly visible as it rises higher into the skies above. There appears to either be lights, or a reflection of the early-evening sun along the side of the craft. The witness would state it was visible for around forty minutes before finally disappearing out of range of their sight.

The footage is a little shaky due to the fact the witness had to use full-zoom to focus on the craft. This perhaps tells how high it actually was. And the possible magnitude of the size of it. You can view the video of that sighting below.

Twenty-Three Sightings In A Year!

In February 2016, a story appeared in the Manchester Evening News stating that, according to MUFON, they had received twenty-three reports of UFO sightings over the skies of the Greater Manchester area in the year from January 2015 to January 2016.

The sightings range in detail, and in outlandishness. For example, according to one report, on 10th January 2015, the unnamed witness noticed a humming sound before seeing a strange object land in a field. Entities emerged from this object and appeared to inspect their surroundings before getting back in their vehicle and leaving with great speed. The most startling detail offered, however, was that sheep who were grazing nearby suddenly “exploded”. Whether this was an intentional act on the alleged visitor’s part, or just a consequence of the small flock simply being in the wrong place at the wrong time is perhaps open to debate.

Only weeks later, on 21st February, a ball of “bright white light” was witnessed. It was moving in and out of the clouds through the night sky. It would move at “high speed”, eventually entering a thick bank of cloud and disappearing. Almost exactly a month later, on 20th March, at just after 9 am on the morning of the much-anticipated eclipse, a witness in nearby Stockport witnessed a “strange light” in the suddenly grey sky as they snapped a photo of the event. The light vanished in an instant but was visible in the picture.

On the 21st September, in the middle of the afternoon at 1:30 pm, two “disc shapes flying at different heights” were witnessed for several minutes. They too suddenly vanished from sight. 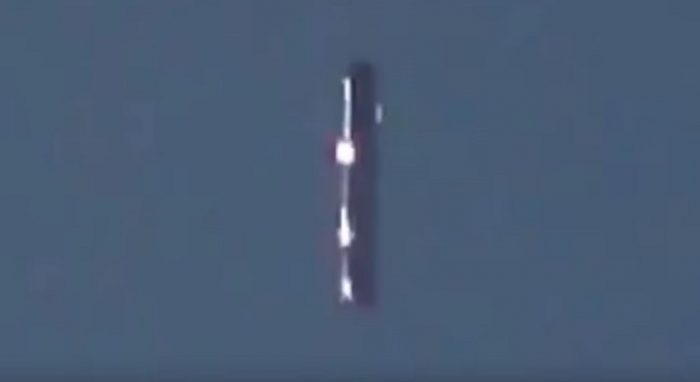 Several sightings speak of multiple crafts, at times even flying “in formation”. On 24th August, for example, no less than five crafts were witnessed in the skies over Bury, Lancashire. The witness would describe them “like they were playing tag”. They would state that three of the strange crafts “shot into cloud” before vanishing from sight. The remaining two aerial vehicles would swirl around the clouds before also disappearing into them at lightning pace.

On 27th September, just before noon in Wigan, “five shiny metallic objects” were seen clearly flying through the sky in a “triangle formation”. Only days later, at around 7 am on 30th September, a resident of Ashton Under Lyne witnessed a strange craft “flying side by side” with an airliner. It would continue on this route for several seconds before suddenly performing a sharp right turn and vanishing directly upwards.

Perhaps one of the strangest of these recently highlighted UFO encounters, though, was one that took place in the early hours of 9th February 2016. At around 1 am, just as the witness was dropping to sleep, a strange sensation in their room compelled them to look out of the window. An airborne object that “made very rapid movements and went in every direction” at unbelievable speeds would fill their vision. The witness would further state that they “knew instantly what it was”. Later in the night, the witness claimed to wake to see an alien’s face above their bed. Thinking it was a dream, they would go back to sleep. The following day, they would discover a small scar on their back that wasn’t there previously.

On the morning of 7th November 2014, a little after 10 am, a saucer-shaped craft with several bright lights was clearly visible over the Middleton area of Manchester. So much so that John Hindley managed to capture a photograph of the visitor. The sighting created a quiet storm of debate in UFO circles.

35-year-old Hindley would later state that the object looked like a “glitch in the cloud”. After he zoomed in on the picture, however, he believed it was clear it was a solid object. He would also state that he had sensed a strange “pulling sensation” when looking out of the third-floor window of his friend’s house which forced him to look up. Even stranger, he would also state that when he looked at the pictures a little later, he would sense this same “pulling feeling”, likening it to a “lunar pull”. After half-an-hour or so, the object disappeared.

A year previously, on 8th December 2013, Duncan Kennedy would spot a strange object hovering over Strangeways prison from the balcony of his Salford flat. He would manage to capture several moments of footage using his mobile phone. While the footage is not conclusive, it certainly doesn’t appear to be a helicopter or airplane.

Another sighting occurred over Salford Precinct at around 10 pm on 21st April 2009. The witness, known only as Rachel, would report the event. She would claim the object to be a “bright orange light, like a fire-ball moving at a steady pace”. The sighting came amid several similar sightings in the area in the previous weeks. 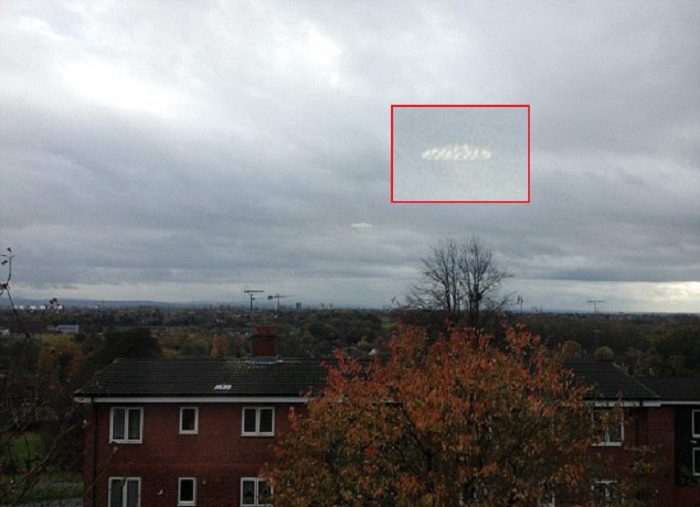 Encounter On The M5

On the evening of 29th June 2008 at 9:50 pm, 25-year-old Navy Engineer, Michael Madden, along with his colleague 22-year-old, Michael Casson, were driving along the M5 following a visit to Manchester when they witnessed a strange craft overhead. The disc-shaped object would hover for several moments, glowing brightly, before it “zoomed off at incredible speed”.

The witness would dismiss in advance any claims that what he saw was a standard aircraft. He would claim, aside from working with Royal Air Force aircraft on a regular basis, he grew up near to Manchester Airport, “so I know exactly what a plane looks and sounds like. This was definitely not a plane”.

Only weeks before the sighting over the M5, on 7th June, three soldiers at Tern Hill Barracks would claim to have witnessed thirteen “rotating cubes” during their night patrol. Only hours later, a police helicopter would report a huge craft in the skies over Cardiff, only eighty miles away. They would report the craft as a huge “flying saucer-shaped” object. Furthermore, after the object almost collided with them they pursued it for some time before it disappeared.

Another sighting, three years earlier in July 2005, would see Peter Sotomski, along with four work colleagues, witness an “unusual object” speeding across the sky at 10 am, in the Eccles area of Manchester. Around five minutes after that object had vanished, a second object appeared, traveling the exact same direction.

Although these sightings have undoubtedly increased as the 2000s have gone on, recently declassified files show that several significant UFO encounters also took place in the Manchester region in the 1990s.

For example, throughout August and September 1996, came a mini-wave of reports of fast-moving bright lights. Sightings would come from Middleton, Oldham, Stockport, Prestwich, Ramsbottom, Wilmslow, and Longsight areas of Greater Manchester. All witnesses would report how fast these lights moved. They would also speak of the stop-start, zig-zag type nature of their movements. This detail, found in many other UFO witness statements, would indicate something far different than a standard aircraft.

Perhaps one of the higher-profile of these sightings occurred on the evening of 6th January 1995 when the pilots of a British Airways flight (Flight 5061) approached Manchester Airport arriving from Milan, Italy. Captain Roger Willis, along with co-pilot, Mark Stuart, would report an incident as they flew over the Pennines. A brightly lit oval-shaped craft screamed past the right-hand side of the plane. The object was only in sight for two, maybe three seconds.

The pilots enquired with Manchester Air Traffic Control as to any other aircraft in the area. The response came back that nothing was in their airspace. And more unnerving for the pilots, radar had not picked up any unknown objects. The MoD would “investigate” the sighting. According to their report in April 1996 due to no evidence other than the pilot’s testimonies, they no longer had an interest in the case. The sighting remains unexplained.

Check out the short video below. It looks briefly at UFO sightings over Manchester.

Previous The Malvern Sighting, And The Late-1970s UK UFO Wave
Next The Trancas Incident – UFO Encounter In The Argentine Countryside