The apparent UFO sighting and subsequent picture captured by the witness, Nils Frost, in Mora, Sweden remains one of the most intriguing, debated, and controversial of such encounters on record over three-quarters of a century after it happened in September 1952, during one of several worldwide “UFO Waves”, no less, that occurred in the 1950s.

The sighting and the apparent proof it produced was investigated very seriously at the time. Even the highest levels of the Swedish military, specifically the Defense Ministry, would take an interest in the case. And even today, the photographs remain unexplained despite some of the finest photographic experts examining them.

What’s more, as we will examine later, several strange incidents during a NATO training operation project named Operation Mainbrace featured sightings of almost identical, spherical objects in the same (relative) area as the Nils Frost encounter just off Scandinavian coast. Whether there is a connection is perhaps a matter for discussion.

As with any case, there are skeptics who propose alternative explanations rather than an actual flying object. However, none of them have managed to settle the sighting convincingly. Did the young office clerk manage to capture a solid, nuts-and-bolts vehicle from another world that evening in 1952? Or were the photographs he would produce nothing more than a hoax of some kind, possibly for financial gain? The case comes to use from the files of UFO researchers Clas Svahn.

The sighting that would lead to this still unexplained picture began at around 11:30 pm on 15th September 1952. After spending the evening at his girlfriend’s, 20-year-old, Nils Frost cycled home through the quiet country roads of Mora in central Sweden. However, upon arriving he noticed “a bright light above the horizon to the north”.

He would continue that the lights, which were a bright yellow in color, were moving slowly across the sky. They did so, however, in complete silence. Realizing he was witnessing something truly out of the ordinary he ran inside the house. He would shout out to his parents who were already asleep in bed to come outside to witness the glow. He then grabbed his camera and rushed back outside. 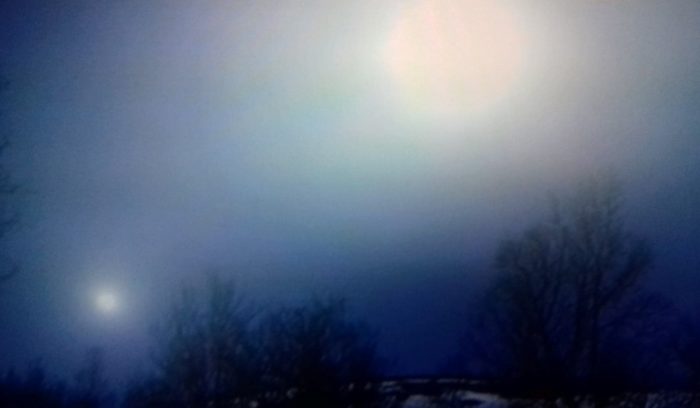 By the time his parents reached the yard, and after focusing on the aerial blanket above him, he realized that two strange lights now hovered overhead. The second light seemingly a little way behind the first.  They would witness the moving objects for themselves. More importantly, Nils managed to snap two pictures. His father would return inside shortly after largely uninterested, but Nils and his mother continued to watch the yellow craft. They would do so for around 10 minutes until they disappeared into the distance.

Nils and his mother would then return inside and contemplate their next move. They would ultimately make the decision to have the photographs analyzed by professional photography experts.

So Bright There Was Damage To The Film?

The case would eventually land in the hands of two of the most respected military UFO investigators in Sweden, Captain Per Sundh and Major Bror von Vegesack.

They would conduct interviews with all concerned. As well as putting the picture under intense scrutiny from various perspectives. They were also able to rule out that any military or commercial aircraft were in the air that evening.

They would also highlight certain areas of interest on the object. Specifically, where it appeared behind the trees (visible at the bottom of the picture) but also, in places, where it appeared to cover over some of the branches due to the sheer brightness. Even more alarming was that it was Vegesack’s opinion, upon examining the film that the object appeared to have caused physical damage such was the intensity of the brightness.

The notion of something being so bright that it could cause physical damage to the film itself has been queried by some in the photographic community. There are, it would appear, arguments to be made for either side of this particular divide.

There are several explanations for the sighting that have been put forward over the years. Ball lightning is perhaps one of the most popular. However, while very real, investigations have consistently ruled out the realistic possibility of this being a case of ball lightning.

Perhaps the detail that supports a hoax the most, at least potentially, is the positioning in the skies of the Moon and the planet Jupiter around 8 days before the claimed sighting on 7th September. On that night, the respective celestial bodies would have been almost in the same positions that the picture shows the alleged objects in.

Might it have been the case that Frost had taken the picture eight days before he claimed? Perhaps to pass it off as a genuine picture of an intelligently guided craft? It is certainly possible. Indeed, records show both objects would have been particularly low on the horizon.

We should note, however, that Frost did not once deviate from his version of events. And we should further note that any possibility of the objects being a planet, or the Moon were ruled out by the Stockholm Observatory themselves as part of the investigation.

Arguably the most damning claims, at least for skeptics of the case, would come from Nobel Prize winner, Hannes Alfvren. After examining the photograph he would state that “the light phenomenon does not resemble anything that we have seen or experienced before”.

And given the country’s positioning to the north of the planet where many natural light phenomenon can be witnessed, combined with the fact that the Ghost Rocket sightings at the end of the Second World War were witnessed by hundreds of the people, we should perhaps keep Alfvren’s words in mind.

Although it is more “in the vicinity of Norway and Denmark” as we are still very much in the Scandinavian region, an incident that took place five days after the date Frost captured his picture is very much worth examining here.

During the NATO training drill Operation Mainbrace, a “spherical UFO” was captured on film in broad daylight. The incident occurred at around 4 pm on 20th September from the deck of the USS Franklin D. Roosevelt. Witnesses would recall how the object appeared “silvery” and appeared to reflect the late afternoon sun.

It appeared from the position of the craft, it was following the military fleet. And what’s more, it would remain behind them for some time.

A reporter onboard the ship, Wallace Litwin, would take several pictures of the strange, shining craft. All would be subject to intense examination by United States Navy Intelligence. The pictures were not made public at the time and only came to the light several decades later. You can view one of those pictures below.

The following day, just off the coast of England in the North Sea during the same NATO operation, came another incident. Six British Royal Air Force pilots in Meteor jets would spot an almost identical craft. Furthermore, they would even give chase to this seemingly metallic, shiny spherical object. And would do so for several minutes before losing sight of it. At around the same time, an almost identical craft was observed over RAF Topcliffe during the same NATO operation.

Still A Case For Debate!

Whether the Nils Frost photographs are genuine or nothing more than an opportunistic hoax for financial gain remains very much open to debate. And given that Frost himself has long since passed away as well as the seven-plus decades that have gone by since the incident, it is likely to be a debate that remains unsolved for the foreseeable future, perhaps even forever.

We know there were many more UFO sightings on record than previous years during the 1952 wave, particularly during the summer and into the fall months. And while some of those sightings and reports will undoubtedly be from hoaxers and genuinely mistaken sightings, the fact that such incidents were happening all around the world at the time surely lends Frost a little bit more credibility. As does the fact that he remained steadfast to his story.

Perhaps of equal importance as to whether the picture was a genuine photograph of an extraterrestrial vehicle or not, is the fact that it caused the Swedish military such concern. While the entire Scandinavian region was only a little over half a decade removed the Ghost Rockets incidents, we have to ask what those in the higher workings of the military and/or government may have been aware of for them to treat the case with such concern.

Maybe one day, against all the odds, the case will be put to rest one way or the other. For now, though, it remains part of the rich tapestry of intrigue that makes up the UFO and alien question. And, of more importance, it remains unsolved.

Check out the video below. It is a collection of UFO pictures from 1950 to 1952. It gives a good idea of the things the general public witnessed at the time of the incident above.