Breaking News
Home / Coronavirus 2020 / The US Already Had A Housing Crisis. Covid-19 Has Only Made It Worse

The US Already Had A Housing Crisis. Covid-19 Has Only Made It Worse

Martha Escudero had been living with her two young daughters on the couches and in the spare rooms of friends and family in Los Angeles for about a year and a half. It had always been uncomfortable, but the coronavirus pandemic made it dangerous: it was impossible to social distance in a home full of people. So she took over an empty house, owned by the state of California.”I’m, like, supposedly successful according to American standards,” said Escudero, who works as a home health aide. “I was born and raised here. I have a college degree, I speak English — and I’m unable to pay rent. To me, that’s ridiculous.”The cost of housing in the US has risen faster than wages for decades. But the problem is particularly bad in California, where a housing shortage and rising rents have forced tens of thousands of people onto the streets and into shelters.The shortage of housing, Escudero said, “is really immoral, inhumane, and unjust.” And, “it’s become even more immediate now with Covid-19. We cannot wait years in order to get secure housing when there’s people now literally dying on the streets and spreading this pandemic.” 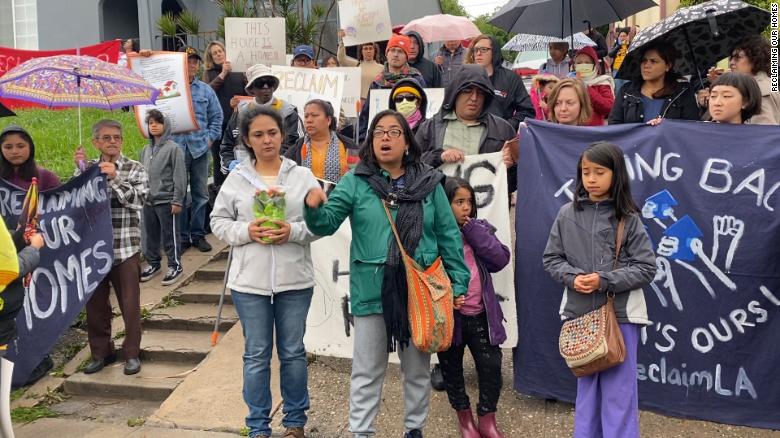 Martha Escudero and her daughters at a Reclaiming Our Homes rally.Escudero is part of a group of housing activists called The Reclaimers, who this spring identified roughly 200 empty houses that had been purchased by the California government for a highway project that had been recently canceled. The Reclaimers took over 13 homes — without a lease and without permission from the state — giving each one to a family in need of a place where they could live and safely social distance.Caltrans, the California agency that owns the homes, sent a letter to The Reclaimers that was seen by CNN that said it “does not consent” to the group’s occupancy of the properties and has asked them to leave. But Caltrans added it, along with local lawmakers, is willing to help them find a place to live.While most housing activists aren’t seizing homes, many are pushing landlords and governments to offer relief to renters and to do it fast in the face of the coronavirus pandemic.There are 500,000 people who are homeless in America, but millions more are housing insecure — meaning they spend a large portion of their income on their rent or mortgage, or they are living in overcrowded spaces or poor conditions. Even before the pandemic, one in four US renters spent more than half their income on rent in 2018, according to a Harvard study.

Can you pay the rent on May 1? Here’s what to do if you can’t“These households can’t build up any kind of savings, any rainy day fund, which means that as soon as they lose hours or lose a job, they just can’t pay their basic monthly bills,” said Jenny Schuetz, a fellow at the Brookings Institution, who studies urban economics and housing policy.For the millions of workers who’ve lost jobs due to shutdowns related to the coronavirus, this has become a stark reality.The federal government sent stimulus checks to people earning $99,000 or less and couples earning below $198,000, and put a 120-day moratorium on evictions for most renters in federally subsidized apartments or homes covered by federally-backed mortgages. Some state and local governments have also offered some relief to renters.But for thousands of housing activists around the US, however, those efforts are not good enough.”In saying ‘cancel the rent,’ we’re saying cancel not only the rent during this period — which, we have no idea when this period will end, right? But also cancel all debt related to that rent. Meaning, cancel it, and we don’t owe you anything,” housing activist Kerbie Joseph explained.Joseph said it’s not enough to pause evictions, or pause rent, only to have multiple months of payments come due at once when society and business reopens. She helped organize a rent strike in New York on May 1, with the goal of pushing politicians to do more to protect the housing of people who cannot work right now.Rep. Alexandria Ocasio-Cortez endorsed canceling the rent in late April. In a recent interview with Vanity Fair, Democratic presidential candidate Joe Biden called for “rent forgiveness,” saying, “Forgiveness. Not paid later, forgiveness.”Alexandria Ocasio-Cortez✔@AOC

MAYDAY: Tenants in NYC & across the country are crying out for rent and mortgage relief. Many of the 30+ million laid off workers can’t pay record-high rents.@IlhanMN’s bill provides relief to renters & small property owners to prevent economic collapse of working families. https://twitter.com/MTVNEWS/status/1255979205457821698 …MTV NEWS✔@MTVNEWS#CancelRent, the largest rent strike in almost a century, kicks off tomorrow, but it’s not just about canceling rent. They’re also fighting to cancel landlord’s mortgages. @AOC, @northwestbronx’s Juan Nuñez and @PHLTenantsUnion explain why6,9422:07 AM – May 2, 2020Twitter Ads info and privacy2,571 people are talking about thisFor now, the lack of aid for renters has landlords bracing for a wave of missed payments.Jon Zemke is a landlord in Detroit who has improvised a kind of social safety net for his out-of-work tenants. They’re doing the landscaping work around the buildings that Zemke would normally hire contractors to do. But so many tenants have lost their jobs, Zemke worries he can only afford to do this exchange for another couple months.

Landlords are bracing for a wave of rent defaults“When we sign a lease with our tenants, we always tell them, ‘If you ever get laid off, come and talk to us. We usually have grunt labor that needs to be done and we’ll happily put you to work doing that for a little time while you find a new job,'” Zemke said.Normally, Zemke and his wife have one request like that a year. But when Michigan issued its stay-at-home order, they immediately got four — and there have been more since.The couple have about 30 tenants, and “half of them are either laid off or furloughed or in some state of employment limbo,” he said. “How long can it last? I have no idea what to expect.”If rental income isn’t coming in for landlords, Schuetz explained, they can’t pay their mortgages. But it’s not just that. They also won’t be able to afford the property taxes that fund local governments, including things like public health programs.The coronavirus has “just drawn attention to problems that existed already,” Schuetz said. “But hopefully this will also make middle-income voters a little more conscious that we all suffer when we have people who are unhoused or unstably housed.”

Tags alien covid 19 Mysterious mysterious world News Secret The US Already Had A Housing Crisis. Covid-19 Has Only Made It Worse ufo usa