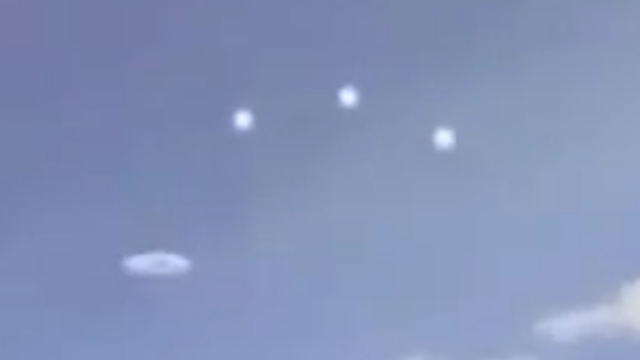 This is as strange as it gets, three white UFO Orbs are being led by a larger white flattish round UFO or Flying Saucer shaped UFO over the mountainous regions of Chile.

This was filmed with a poor camera but the consistency is there for a real event because this has ticked the boxes so to speak and have not flagged any suspicions that’s why I’m posting about this.

Close up of the three Orbs.

It is in Chile where some of the most exciting and real UFO encounters are taking place, but why I don’t know? There is speculation about the sparsely populated region s giving Aliens and UFOs the freedom they need to study the Earth.

Close up of the large white circular UFO.

Chile always tops out as the best place to spot a UFO. Maybe it’s the fact that it’s one of the least polluted places on Earth or the fact that the people don’t tell anyone when they get abducted by Aliens (who would right)? Being ahem, “examined” by Aliens wouldn’t be the subject of talk at my dinner table I can tell you that now! For real.

Here is a post about the top 8 places your more than likely to spot a UFO:

Chile is often mentioned as the country with the highest recorded number of UFO sightings. Due to its low humidity, high altitude ridges, and clear skies with little pollution, Chile has become a favourite among UFO-seekers from around the world.

The country has even launched the CEFAA (Committee for Studies of Anomalous Aerial Phenomena (CEFAA), a government body which investigates UAPs (Unidentified Aerial Phenomenon) under the control of the Chilean Air Force.

Not long ago the Chilean government and their air force released that amazing and ground breaking UFO video where the Jets where following the UFO (I’m sure you remember that one) and the video was in night vision?

Image from the declassified UFO video from the Chilean government.

This UFO was Top Secret for ages, but seriously what has it really changed since it was declassified or released to the general public? I’ll tell you what it’s done, absolutely nothing at all.

Nobody is crying in the streets, anarchy hasn’t been raining down from the rooftops and not one question has been asked in any government assemblies around the world as far as I know.