The state of Illinois in the upper Midwest of the United States boasts several major UFO sightings throughout the 2000s. Indeed, the area is a sudden hotspot for such activity according to some researchers. And what’s more, the trends of the data suggest these sightings show no sign of decreasing. Of the fifty states that make up America, a collection of data from 2000 to 2015 ranked Illinois as eighth in the US in terms of UFO sightings.

What further makes these high-profile sightings over the last two decades even more intriguing, and credible, is the multiple witnesses, many of whom are experienced pilots, aviation experts, and police officers. Perhaps it is also worth noting that Illinois sits on the shores of Lake Michigan, a body of water with a long history of strange phenomena, disappearances, and of course, UFO activity. Some theories even speculate about the presence of an alien base or a portal at the bottom of Lake Michigan. As outlandish as that sounds, that could, in theory, explain the increase in sightings in this part of America.

With the twenty-first century less than a week old, on 5th January 2000, at 4 am in Highland, Illinois, Melvern Noll was making his way home from work. He would stop at the miniature golf course he owned along the way, just to check it was secure. It was then that he spotted something unusual in the sky.  What he first thought was a “bright star” was increasing in size as it came towards his location.

Speaking about the incident a decade later, he would state, “It looked just like a flying house with windows in the top and bottom.” He would add “I still believe it was something from another planet!”

As well as the yellow “window” lights there were multiple rows of red lights, and by the time it was overhead he would estimate it to be “the size of a football field!”

The object came closer and closer until it came to a complete stop above him. Feeling fear building up in him, imagining he was about to be abducted, the object then calmly made its way towards the southwest. Noll would report the sighting, and after assuring those at the desk that he hadn’t been drinking that evening, the incident was logged. More importantly, at Noll’s request, they would issue an alert to all police units in the area to “look out” for anything strange.

As it happened. Noll’s was just one of many that would come in that evening. As well as a wealth of calls from residents of St. Clair, reports would also come from the counties of Madison and Monroe. By the time the incident was over, units from eight separate police departments were involved in what would turn out to be one of the strangest mornings in their respective careers.

Huge Object “Blotted Out” The Stars!

Police Officer Ed Barton was one of the first to respond to the alert. From his position in Lebanon, Illinois, he could see “two intensely bright lights”. The lights appeared uniformed and close to each other. He would also report what seemed to be “rays or spikes of light coming off them!” After making his report he would start his vehicle and head in the direction of the lights. After a short while, however, he realized that they seemed to be heading in his direction. He would stop his car, turn off the flashing beacons on the roof, and wait.

Barton would later describe the object as a triangular shape that was “longer than it was wide”. He couldn’t estimate the size from his position, but he did say as it passed overhead the object’s body “blotted out the stars”. This confirmed to him that it was not only large but solid.

When it was directly overhead, it appeared to change direction while remaining in the same spot. As he was radioing in his information, the object suddenly sped off in an instant. Just to get an idea of how fast the object was traveling, investigators would later estimate it moved eight miles in only three seconds.

Shiloh police officer, David Martin, would radio his report moments later. His description was almost identical to Barton’s. Including how the object would suddenly accelerate and vanish from a stationary position in mere seconds. 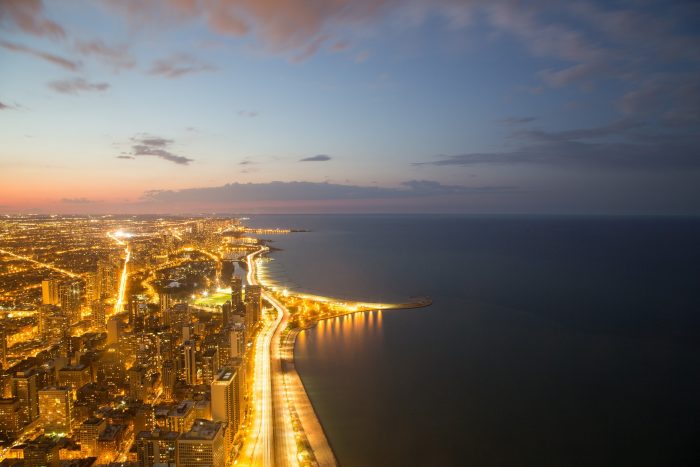 Lake Michigan against the Illinois shore

Multiple sightings continued to come in, both from concerned residents, and on-duty police officers. All were consistent with the initial reports from Noll and officers Barton and Martin.

Most witnesses and researchers agree that the technology on display (in terms of its instant propulsion) suggests the craft to be of alien origin. Or perhaps it is the result of reverse engineering of alien technology. Maybe this strange incident was a “test flight” of a secret, black-budget military project.

Perhaps an interesting aspect of these sightings is the response of nearby Scott Air Force Base, who have a 24-hour, fully staffed control tower. They would almost certainly have picked up the object on their radar equipment. However, according to the spokesperson for the base, the tower was not operational in the early hours of the morning in question. This was due to “an unexplained suspension of operations!” Although researchers have made attempts to find out what and why the “suspension” occurred, the base refuses to comment further on the matter.

The video below looks at the triangle of sightings over Illinois that January morning in a little more detail.

Between the 21st August 2004 and 31st October 2006, four sightings of bizarre lights would be witnessed by multiple residents of the Tinley Park and Oak Park areas of Chicago, Illinois. Details of the sightings were always the same. Residents would report three red-orange orbs, either motionless or moving silently in the night sky. Sightings would last for around half-an-hour, and many photographs and video footage were taken by residents of the Chicago suburbs.

The initial sighting on 21st August 2004 occurred shortly after the “Ozzfest” concert had finished at the Tweeter Center (now named the First Midwest Bank Amphitheater). As concert-goers made their way out of the venue, the roads around the vicinity were soon full of slow-moving traffic. Because of this, when the strange orbs of light appeared overhead, there were ample witnesses. Some would report the lights “moving independently of each other”, while others would insist they had a “rigid triangular shape”.

Other sightings would occur on 31st October 2004, 1st October 2005, and 31st October 2006. The two Halloween sightings again had multiple witnesses on the streets who might not have otherwise been there due to many parents taking their young children trick-or-treating.

Many UFO researchers have examined the multiple pieces of video footage and photographs. The general consensus is that the lights move in unison to each other and appear as a triangular shape. Furthermore, estimations of the size of the craft places it at around 1,500 feet across.

The video below looks at these sightings in a little more detail.

Just days after the last Tinder Park sightings, on 7th November 2006, another incident with multiple witnesses took place. This time over O’Hare International Airport in Chicago, one of the busiest airports on the planet.

On an otherwise normal afternoon at 4:15 pm, a report would reach federal aviation authorities of multiple sightings of a “silver, saucer-shaped craft” hanging in the air over Gate C-17.

Investigations would reveal that it was as Flight 446 was readying for departure on its way to Charlotte in North Carolina when the mysterious craft was first noticed. Both a ramp employee, and the pilot and crew of Flight 446 witnessed the craft. As did many other airport employees and passengers waiting to board their planes. Many more people would witness the object from outside the grounds of the airport.

Strangely, there was no confirmation of the object on radar, despite the very clear visual evidence by the multiple witnesses. It would remain in place for around five minutes, a sizeable crowd now gathered inside and outside of O’Hare. Then, without warning, it shot directly upwards and vanished. In the sky above was a visible “clear blue hole” in the clouds. This remained for several moments and then “closed itself” leaving only cloud and sky as before.

Untruths From United Airlines And The FAA

There is a real possibility that the sighting over O’Hare might not have made it into the public arena. Or at least not with as much detail as it did. United Airlines and the Federal Aviation Authority (FAA) would initially deny there was any official information on the “alleged sighting”.

However, the “Chicago Tribune” newspaper would quickly file a Freedom of Information Act request, which forced the full details, and what the respective organizations knew about it into the public arena. As a consequence of this, records of a phone call from the United Airlines supervisor to a manager at the FAA on the afternoon in question came to light. In it, they very clearly discuss the “UFO sighting”, proving their initial response to the media was false.

Perhaps predictably, the FAA would ultimately find the incident to be down to a “weather phenomenon”. This, despite the multiple witness statements of a solid, silver disc. Furthermore, they would declare that no further investigation would go ahead. This would infuriate and frustrate UFO researchers and organizations. As it would many of the witnesses, who felt their accounts were essentially being dismissed.

It was highlighted by those seeking further (and open) investigation into the incident that to not do so was not in line with the FAA’s safety and security mandate. The fact, they would claim, that a solid object could hover over such a busy airport and fail to show up on radar was in itself a “potential threat to flight safety!”

The video below looks at the O’Hare Incident a little further.

You may republish short quotes from this article with a reference back to the original UFO Insight article here as the source.  You may not republish the article in its entirety.